What are Linear Regulators?

The linear regulator, also called the 3-terminal regulator, is a familiar device capable of stepping down the DC in a simple manner. Basically this device consists of three terminals, input, output, and GND, with an output voltage that is preset to an industry standard voltage. In addition, there is a type that permits adjustable output through the use of external resistors and a type that has a built-in on/off (shutdown) capability. Depending upon the specific function supported, the number of terminals provided in a linear regulator can vary.

In terms of operating mechanism, the linear regulator operates in complete linear feedback loop control, where an error amplifier monitors the voltage that is fed back from the output and regulates the output so that it remains constant despite input variation or output load fluctuations. Devoid of any switching operations, the linear regulator is free of any noise or ripples originating from switching. 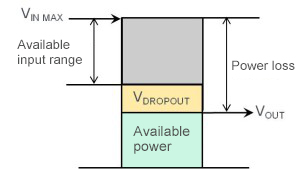 While the method of using it is simple, the operation of the linear regulator requires caution in terms of loss = heat. As illustrated in Figure 15, in the linear regulator the product of the voltage difference between input and output and the current that flows into the input terminal amounts to power loss, which manifests itself in the form of heat. Without a heat radiator plate, linear regulators can handle at most 2W. Obviously, a large loss means poor efficiency. 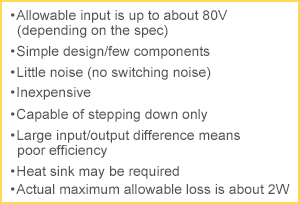 In addition, because the linear regulator has a ripple rejection capability, in certain situations it can be used to reject any residual ripple from the DC after it has been smoothed out. In noise-sensitive applications the advantages of such a combination can be beneficial.

・Although linear regulators are commonly used in the transformer system, the maximum allowable loss is about 2W, and efficiency may be a concern.

・Because the linear regulator is free of any switching noise, it can be beneficial in noise-sensitive applications.