As fundamentals of switching regulators, in this section, we describe the voltage control methods. The function of a voltage regulator, irrespective of the type of switching regulator employed, is to generate regulated output voltages. To this end, loop control is performed by feeding the output voltage back to the control circuit, as was explained in the section on “Feedback Control Method”. The subject of this section is voltage control methods, describing what controls are performed in order to adjust the input voltage to, say, 5V.

PWM represents the most commonly employed voltage control method. In this method, at fixed cycles the amount of power corresponding to the power that needs to be output is switched on to extract it from the input. Consequently, the ratio between on and off, that is, the duty cycle, changes as a function of the required output electric power.

An advantage of PWM control is that because the frequency is fixed, any switching noise that arises can be predicted, thus facilitating the filtering process. A drawback of the method is that also due to constant frequency, the number of switching operations remains the same whether the load is high or low, and consequently, the self-consuming current does not change. As a result, at times of light loads the switching loss becomes predominant, which reduces the efficiency significantly.

● The frequency is constant, and output voltage is adjusted with duty cycle

・PFM control (Pulse Frequency Modulation)
PFM is of two types: the fixed-on time type and the fixed-off time type. In the case of the fixed-on time type as an example (see the figure below), on-time is fixed with variable off-time. In other words, the length of time it takes for the power to turn on next time varies. When the load increases, the number of on-times in a given length of time is increased to keep pace with the load. Thus, under a heavy load, the frequency increases, and under a light load it diminishes.

On the positive side, because not a great deal of power needs to be added during a light-load operation, the switching frequency is reduced, and the number of required switching operations decreases, with reduces switching losses. As a consequence, the PFM method ensures that high efficiency is maintained even at a light load. On the negative side, because the frequency varies, the noise associated with the switching remains indefinite, making the filtering process difficult to control and the noise difficult to remove. Also, if noise enters below 20 kHz, which is an audible band, the problem of ringing can occur, which produces an adverse impact on S/N in audio devices. As far as noise is concerned, PWM may be preferable in many respects.

The question of which method, PWM vs. PFM, is to be adopted requires a good understanding of the properties of the two methods, and involves trade-offs. To achieve the best of the two worlds and maintain high efficiency, there are ICs that operate in PWM during steady-state operations and that switch to PFM to handle light loads. 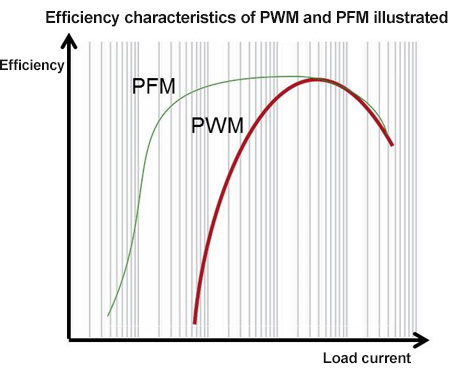 ・In pulse-width modulation (PWM), the frequency is constant, and duty cycle is used to control the voltage.

・ PFM (pulse frequency modulation) operates with a fixed pulse on-time (or off-time) and performs control by varying the off-time (or on-time).

・ These methods should be used with a good understanding of their positive and negative aspects.

・ There has been a slew of ICs that are designed to switch between the two types of controls and incorporate even finer control modes.