What are MOSFETs? - Fast trr SJ-MOSFET：PrestoMOS ™

The previous time, we explained, as examples of SJ-MOSFETs, the features of the standard AN series, low-noise EN series and high-speed KN series in ROHM's lineup of SJ MOSFET product series. This time, we will discuss the advantages of a fast trr, taking as examples the two PrestoMOS™ series of SJ MOSFET devices with even faster trr values. 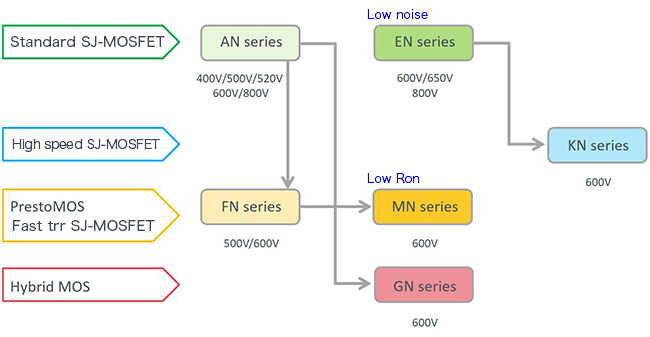 PrestoMOS MOSFETs are ROHM SJ-MOSFETs which, in addition to the SJ-MOSFET features of low on-resistances and small total gate charges combined with high voltages, also achieve high-speed reverse recovery times trr of the internal diode. The PrestoMOS FN series has trr values about 1/5 of those of standard-type AN series devices. At the same time, the reverse recovery current Irr is also reduced to about 1/3. Through these improvements, to begin with, switching losses can be reduced. Incidentally, the "Presto" in "PrestoMOS" from a tempo mark in music that is used to mean "rapid". 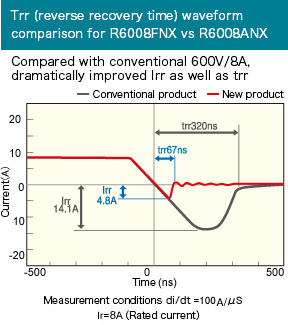 The FN series with faster trr values was developed in order to reduce losses in inverter circuits and motor driver circuits, and to further reduce the number of components and advance circuit miniaturization by eliminating the need for external diodes. In general, these circuits are configured by combining MOSFETs or IGBTs and diodes. The reason for including the diodes is to suppress commutation losses that occur during the trr of the internal diode of the MOSFET or IGBT; normally, two external fast recovery diodes (hereafter "FRDs") are necessary.

From the standpoint of current paths, these external FRDs are not needed, but the internal diode of a MOSFET does not have a very fast trr, and so the reverse current Irr during this time trr results in a large loss. In order to block this Irr, two FRDs are needed to secure a fast pathway for the regeneration current in an inverter or other circuit.

Thus, the need for FRDs of course increases the number of circuit components, and moreover, the addition of FRDs in the drain current (Id) pathway also increases losses while the MOSFET is ON.

PrestoMOSs were developed to shorten the trr of the internal diode, and so circuit operation with minimal losses can be achieved even without using these two FRDs. Consequently, the two FRDs become unnecessary, losses can be reduced, and compactness and high efficiency are made possible.

The following graphics illustrate the circuits in the power stage and present data comparing losses for a general power conditioner (inverter) circuit and for a motor driver circuit. 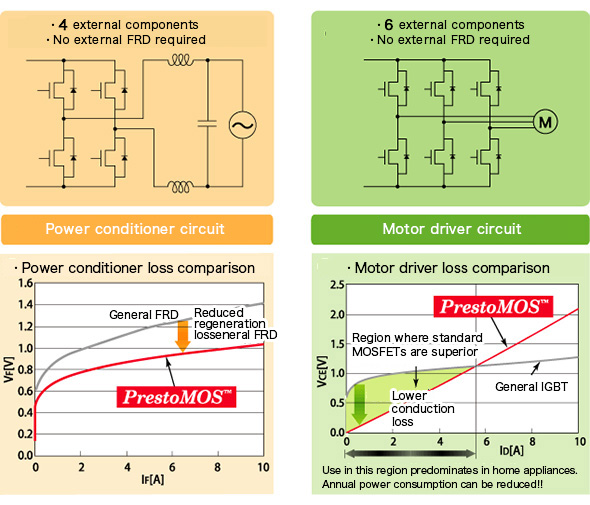 In the Power conditioner circuit, losses are compared when using a PrestoMOS and when combining a conventional MOSFET with FRDs. The PrestoMOS reduces regeneration losses because VF is lower than when using the FRDs.

In the example of a motor driver circuit, compared with an IGBT, the PrestoMOS achieves a lower VCE (for a MOSFET, VDS) in the low-ID region, and so reduces losses in this region. When targeting home appliances, use is dominant in the region where MOSFETs are superior, and so reduced power consumption can be expected.

The MN series was developed by starting with the FN series and its fast trr values, and further reducing the on-resistance and the total gate charge. As indicated in the graphs below, a 32% reduction in A∙Ron, and a 59% decrease in Ron∙Qg, are achieved. This series was developed with the aim of further improving the efficiency of inverter circuits and the like. 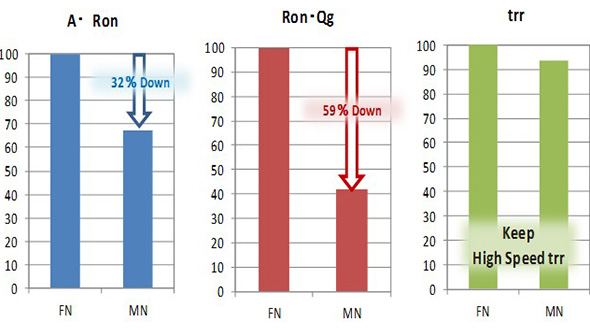 Finally, we provide links to technical information for these two series. In order to better understand these products, it is important to carefully study the data sheet specifications and characteristic graphs.

・By shortening the trr of the internal diode, inverter and motor driver circuits can be made smaller and more efficient.