Conduction of heat is movement of heat between substances or molecules. Thermal resistance in heat condition is represented in the diagram and by the equation below. 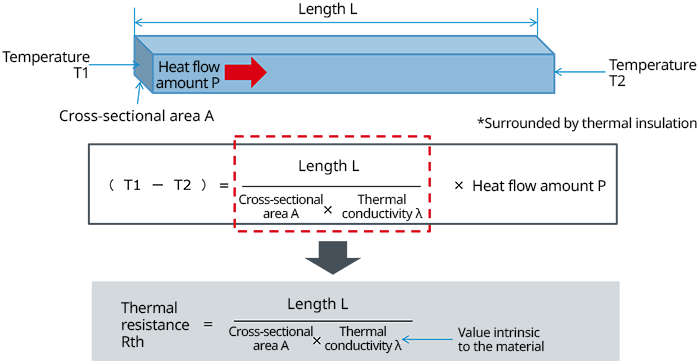 The first equation indicates that the temperature difference between T1 and T2 is equal to the term surrounded by the red dashed line, multiplied by the heat flow amount P.

The last equation indicates that the term surrounded by the red dashed line is equivalent to the thermal resistance Rth.

The reader has probably grasped this directly from the diagram and the terms in the equation, but in heat conduction, the thermal resistance can basically be thought of as analogous to the electrical sheet resistance of an electrical conductor. It is well known that the sheet resistance is determined using an equation in which resistivity is substituted for the thermal conductivity inside the red dashed line. Just as the resistivity is a value intrinsic to the material of an electrical conductor, the thermal conductivity is also a value intrinsic to the material.

The equation to determine （T1－T2） consequently becomes the thermal resistance Rth times the heat flow P, in keeping with the "thermal Ohm's law" explained in About Thermal Resistance.