・In a brushed motor, the rotor rotates due to continuous movement in the same direction of the coils according to the state of connection of the brushes and commutators, the generation of currents and magnetic fields, and the relation between fixed magnets and the polarities of the outsides of the coils.

In this second article on brushed motors, following the explanation of motor construction in the previous article, we explain the principle of motor rotation.

Principle of Rotation of a Brushed Motor

Here the principle of rotation of a brushed motor is explained; but still images and words are being used to explain something that moves. Please use your power of imagination to augment the explanation. 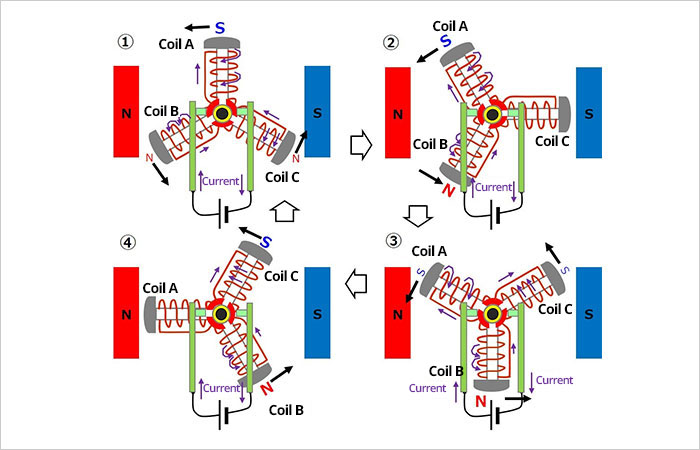 Suppose that coil A is uppermost, and that a power supply is connected to the brushes, positive (+) on the left side and negative (-) on the right. A large current flows from the left brush through the commutator to coil A. The upper part of coil A (on the outside) becomes a S pole.

However, because one-half of the current of coil A flows in the opposite direction, flowing from the left brush to coil B and coil C, the outsides of coils B and C become weak N poles (represented by small characters in the figure).

Due to the magnetic fields generated by these coils and the repulsion and attraction of the magnets, forces act to cause the coils to rotate counterclockwise.

Next, in a state in which coil A has moved 30° counterclockwise, the right brush is in contact with the two commutators. Current flows continuously in coil A from the left brush to the right brush, and the outside of the coil maintains an S pole.

The same amount of current in coil A flows in coil B, and the outside of coil B is a strong N pole.

The two ends of coil C are in a short-circuit state due to the brushes, so that a current does not flow and a magnetic field is not generated.

Under these conditions also, a force is received causing counterclockwise rotation.

When rotation continues a further 30° to ③ and then again to state ④, the process repeats in which, when a coil rises above the horizontal axis in the center the coil outside end changes to an S pole, and when it falls below the axis it changes to an N pole.

Moreover, when the power supply is disconnected, magnetic fields causing the rotation to continue are no longer generated, and the rotor stops.