・In PWM driving of a brushed DC motor, voltage application and current regeneration are repeated.

・There are multiple methods of current regeneration using an H bridge; losses differ depending on the regeneration current path.

In the previous article in which the principles of PWM driving of brushed DC motors were explained, current regeneration was based on the method of shorting the motor terminals. But there are other methods of current regeneration, and each of these methods has matters that demand study.

Below are schematic diagrams used to explain PWM driving principles. Transistors that need not be shown are omitted. (a) shows operation during voltage application, and (b) is current regeneration by shorting the motor terminals.

As a matter that should pragmatically be considered, transistors (in this case, MOSFETs) are used for switching in the H bridge, and so for each current path, the on resistance of the transistor must be added as a loss. This is also true for the current regeneration methods described below.

In addition to (b), there are three current regeneration methods. Method (c) is a method in which, from the voltage application state, only Q1 is turned off (Q2 and Q3 remain off; Q4 remains on). The regeneration current in this case passes through the parasitic (body) diode of Q2, which is off, and flows as in (b). In this case, the current path includes the forward voltage VF of the parasitic diode in addition to the on-resistance; consequently, the current is rapidly attenuated. The equivalent average voltage applied to the motor is smaller than the voltage corresponding to the duty cycle by the loss due to the VF component. 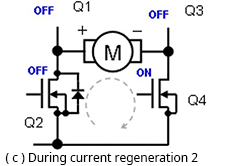 Further, a power supply Ea is present in the current path, acting to pass a current in the reverse direction, so that attenuation of the regeneration current is extremely rapid, and the equivalent average voltage applied to the motor given on the on duty is extremely low. When driving at 50% duty, the equivalent average applied voltage is close to zero. In this case, diodes are present, so that when the current goes to zero, regeneration stops, and no current flows in the reverse direction. 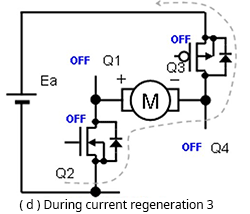 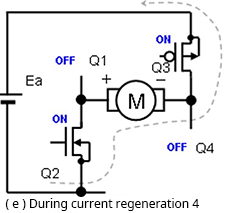 Hence as with method (d), when driving at 50% duty, the equivalent average voltage applied to the motor is zero. At 100% duty, the equivalent average voltage applied is maximum, and for duties between 100% and 50%, the applied voltage can be controlled between the maximum voltage and zero voltage, proportionally to the duty. At duties between 50% and 0%, current flows in the direction opposite the current direction from 100% to 50%. Below are PWM voltage and current waveforms for these conditions. 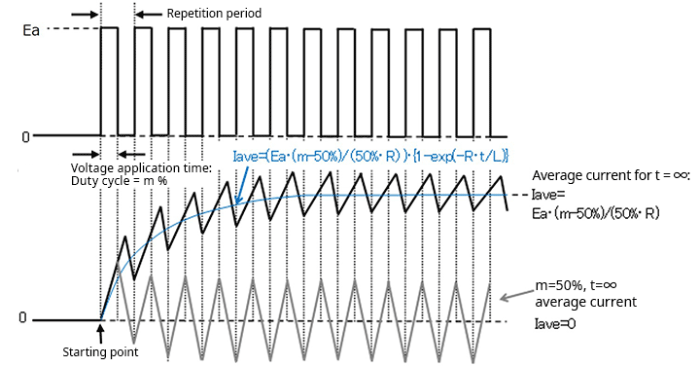 The losses mentioned briefly in the above explanation will be discussed separately in the next article.