・As one measure to employ when the phase margin cannot be measured, the step response method can be used to easily confirm the stability of a linear regulator.

・From observed step response waveforms, component values are for which ringing is minimal and settling is rapid.

In the previous article a method of measuring step response and the related circuit were presented. This article presents examples of measurement data.

The waveform diagrams below are examples of step responses (load transient responses) when the RESR in the circuit diagram is varied between 0 and 1 Ω.

① is for RESR = 0 Ω, that is, a resistor has not yet been added. When the load current rises, oscillation occurs in the output. This is an example of oscillation that occurs when an MLCC is used as the output capacitor. With respect to phase, in this state there is almost no margin. 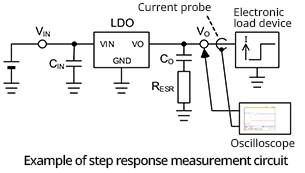 ② is for the case in which RESR is set to 0.1 Ω. Ringing occurs and then is attenuated, but a long time is required for settling, and in this state it is possible that the ringing may have an adverse effect as noise.

③ is for when RESR is 0.2 Ω. Ringing is greatly reduced. Please note that from here on the time axis is 20 μs/div.

As RESR is further increased up to 1 Ω, the ringing declines somewhat, but the response is delayed, and the drop in the output voltage when the load current rises is increased.

In these six examples, one can take the view that a compromise is reached at the value of RESR at ③ or ④, or at a point between them.

Here something must be noted. These examples are for a CO of 22 μF, but when the electrostatic capacitance of a CO changes, the characteristics also change. There are cases in which the capacitance must also be taken into consideration during optimization. Moreover, as one would expect, the load current value, slew rate of current steps, type of linear regulator IC, and various other factors also have their effects. Hence it is difficult to determine component values by a fixed method, and it cannot be said that an optimal component value discovered for certain circuit conditions will be applicable to other circuits. As a starting point, the resistance value of an example may serve as a benchmark, but other conditions must also be taken into consideration. 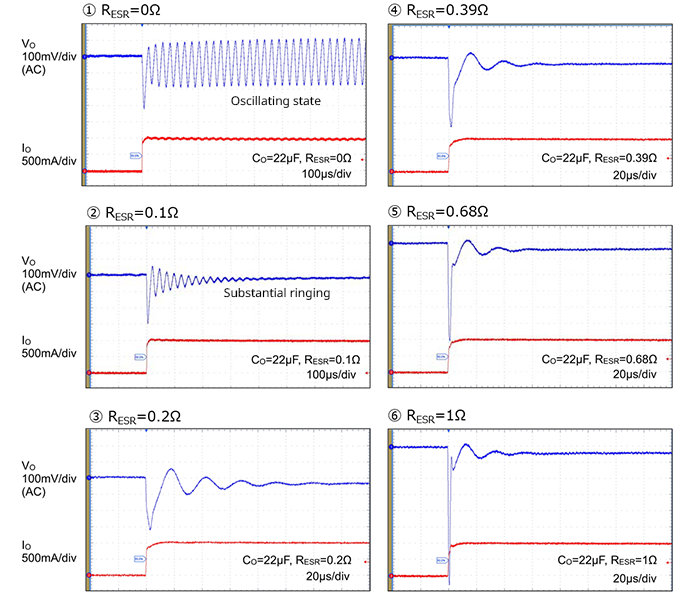 List of articles related to the「Examples of Step Response Waveforms」