・Step response characteristics can be regarded as comprehensive characteristics due to a number of factors, and so rather than considering the value of just one component, optimization will require study of other components as well.

・The capacitance of the output capacitor CO also affects the step response characteristic.

・As a practical matter, optimization depends on striking a balance between RESR and CO.

In the previous article, the relationship between step responses and RESR was described, and as a point to be noted it was indicated that in addition to RESR, if the value of the output capacitor CO changes, the characteristics will change. In this article, in the interest of a deeper understanding of this point, we present an example of measurement data for step response waveforms with different CO values under the previous measurement conditions.

The step response waveform shown in the previous article was an example of a case in which RESR in the circuit diagram was changed between 0 Ω and 1 Ω, with the output capacitor CO at 22 μF. Below are shown waveforms when RESR is changed with CO = 22 μF as in the previous article, and with CO = 44 μF. It should be noted that the time axis is changed from area ③ in each waveform. 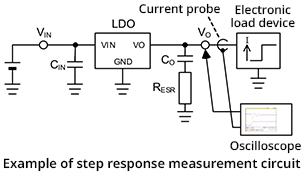 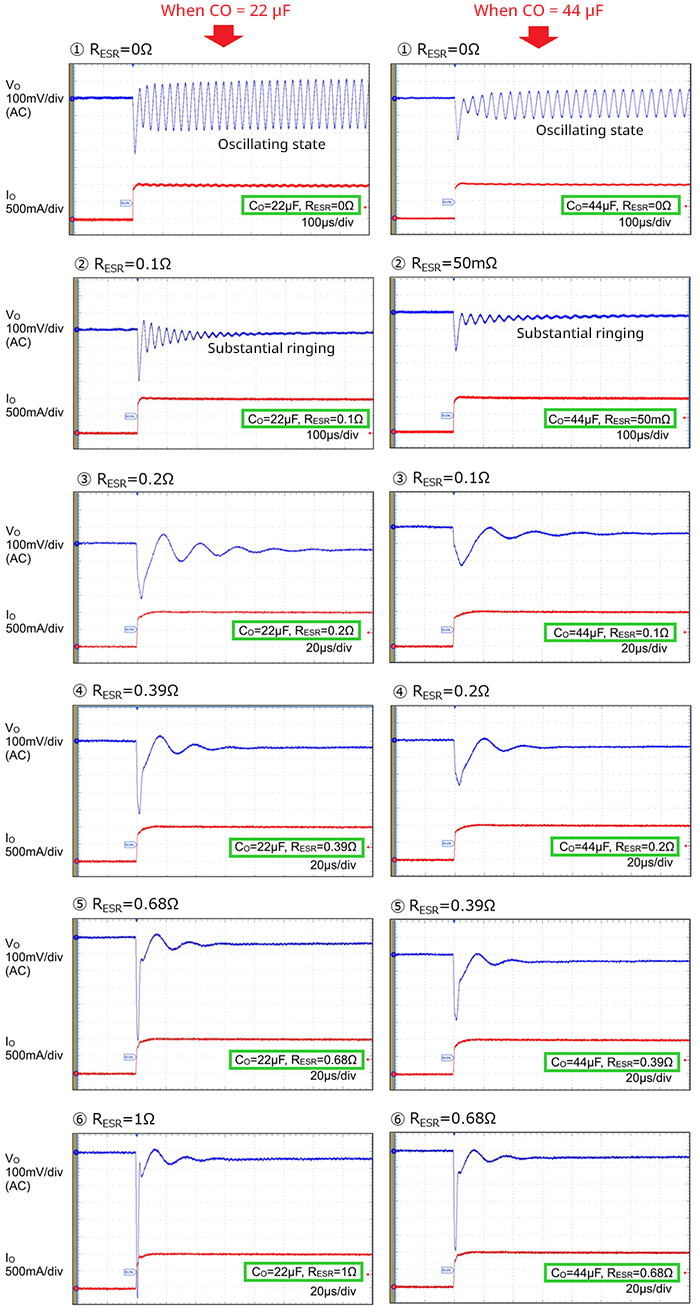 From these waveforms, we can see that, as noted in the preceding article, the step response characteristic changes depending not only on RESR but also on the value of CO. Moreover, we also see that the change is not linear. Further, as explained in the previous article, there are also other factors that have an effect, such as the load current value, the slew rate of the current step, and the type of linear regulator IC. Hence it is not possible to choose component values that work in all cases, and values that are confirmed to be optimal for the circuit conditions should be employed.

The sizes of MLCCs (multi-layer ceramic capacitors) differ depending on the capacitance, and low-value resistors used as RESR also differ in size depending on the resistance value; both differ in price accordingly. These matters must also be considered when optimizing the step response with an appropriate balance between CO and RESR.

This article concludes the series on “Easy Stabilization/Optimization Methods for Linear Regulators”.