・In PCB layout design, it is important that current paths in the circuit and the properties of currents flowing in these paths be understood (and not only in step-up DC-DC converters).

・The system of current differences when the transistor is on and is off is extremely important for board layout, and demands the utmost attention.

Current Paths When the Switching Transistor Q2 is Turned On

The circuit diagram below schematically shows a step-up DC-DC converter; the red lines represent the main currents flowing when the switching transistor Q2 is turned on. CIBYPASS is a high-frequency decoupling capacitor; in many cases, a small-capacitance ceramic capacitor is used. CIN is a capacitor provided mainly for the purpose of stabilization, and has a comparatively large value. Most of the current that flows suddenly at the instant that the switching transistor Q2 turns on is supplied from CIBYPASS, and then supplied from CIN. When the input current is not so very large, CIN can be combined with CIBYPASS, using a single capacitor for both purposes. Gradually changing currents are supplied from the input power supply. During this time, current energy is stored in the inductor L. 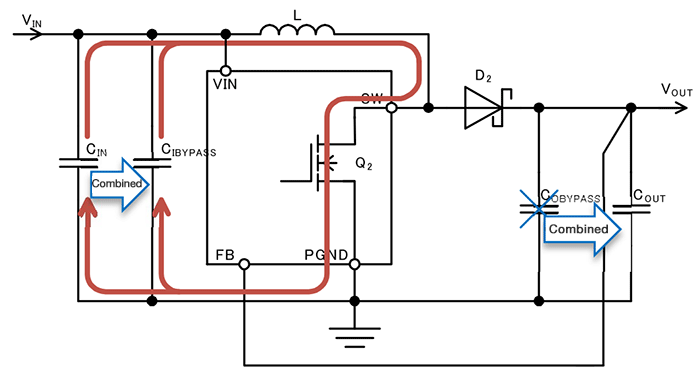 Current Paths When the Switching Transistor Q2 is Turned Off

Next, the state of currents when the switching transistor Q2 is turned off is shown (the red line in the diagram). The inductor L acts to hold the immediately preceding current value even after the switching transistor Q2 turns off. The left end of the inductor L is fixed at the voltage VIN, and continues to supply current so as to add a voltage to VOUT, and therefore VOUT becomes higher than VIN (step-up operation). Hence the longer the on-time of the switching transistor Q2, and the greater the amount of current energy stored in the inductor L, the greater the power that can be extracted. However, if the on-time of the switching transistor Q2 is made unnecessarily long, the time during which power is supplied to the output side becomes short, and efficiency is worsened. For this reason, a limit is imposed on the maximum value of the on/off time ratio (the duty cycle). In a circuit with a small output current, by using a ceramic capacitor with a good frequency characteristic for COUT, this capacitor can also serve as the high-frequency decoupling capacitor CBYPASS. 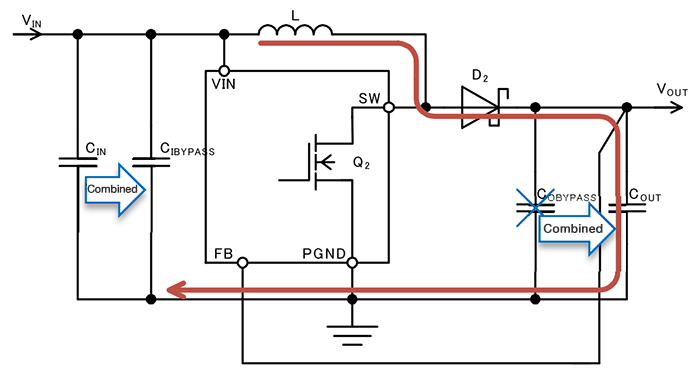 Finally, the difference in the currents when the switching transistor Q2 is on and is off is indicated (the red lines in the diagram). Each time the switching transistor Q2 changes from off to on and from on to off, the current paths indicated by the red lines change sharply. Because the changes in this system are sudden, waveforms containing many high harmonics appear. The layout of this system of differences is an important issue for PCB layout, and requires the highest degree of attention. 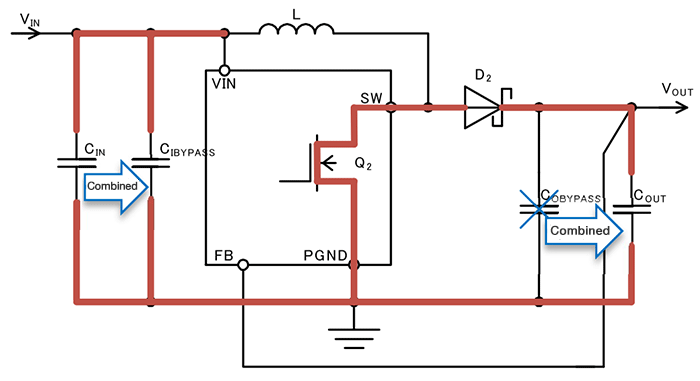