In this article we will be discussing the role of position sensors and their placement, as aspects requiring attention relating to position sensored driving, which was one topic addressed in "Feasures and Selective Use of Sensored and Sensorless Driving of Brushless Motors".

The position sensors used in motors are generally magnetic sensors (Hall elements, Hall ICs). Below are schematic diagrams showing the construction of a motor and sensor placement. This is a 3-phase brushless motor (outer rotor type), the basic construction of which consists of a rotor provided with magnets and a stator employing an armature (windings, iron core).

Position sensors (Hall elements, Hall ICs) play the role of precisely detecting the rotation position of the motor. Specifically, the position sensor is installed in a place like that shown in the diagram, and must precisely detect the magnetic flux Φg of the rotating rotor. However, a torque is generated in the motor by the linking of the current in the armature with the rotor magnetic flux. Magnetic flux Φa is then generated by the current flowing in the armature.

In this way, how to hold the detection error of a position sensor to a minimum is a vital point requiring attention when designing the arrangement of brushless motor position sensors. 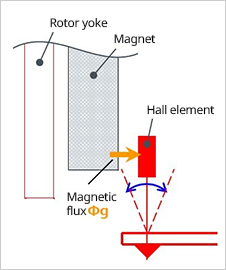 Hall element/Hall IC:
A magnetic sensor utilizing the Hall effect that outputs a voltage according to a magnetic flux density. The Hall effect is a phenomenon in which, when an electric current is passed through a solid and a magnetic field is applied perpendicularly to a surface of the solid, a voltage occurs in the direction perpendicular (orthogonal) to both the direction of current flow and the magnetic field direction. A Hall IC (also called a Hall sensor) combines an op-amp, a digitizer, and other elements.
Outer rotor type:
A construction in which inside coils are fixed and an outside magnet yoke rotates. Features include a large moment of inertia of the rotation shaft, reduced need for miniaturization of magnets, and ease of winding coils. In contrast, in an inner rotor type construction, an outside yoke is fixed and inside permanent magnets rotate.
Hysteresis:
In a Hall IC and other devices, threshold values used to judge magnetic flux densities include the operating magnetic flux density (on) and the return magnetic flux density (off); the difference in these threshold values is the hysteresis. This is a dead zone that prevents shifting of the output that would occur, if there were a single threshold value, due to a slight change in magnetic flux near the threshold value.