Hello, everyone! My name is Tanaka, and I'm in charge of the development of new bipolar transistor products at ROHM.

This is the first of a five-article column in which new power transistor and power diode products are explained firsthand by the engineers tasked with their respective development. These are intended as articles from the engineer's point of view, in contrast with new product press releases and the like. I hope you find them interesting.

Bipolar transistors are semiconductor elements in which N-type and P-type semiconductors are joined. They can have a P-N-P or an N-P-N structure. They operate using both holes and electrons, that is, using both polarities, and so are called "bipolar". In general, they have three terminals, called the collector, the base, and the emitter, and they are used for current amplification and as switches to turn circuits on and off.

I'll note in passing that there exist unipolar transistors, which are contrasted with bipolar transistors. This is not a term that one hears very often these days, but this device is equivalent to a field effect transistor (FET). Well, let's leave the background knowledge at that and move on to the main subject.

Bipolar transistors, as relatively inexpensive devices used in diverse applications, had been the mainstream of transistor products; but demands for reduced energy consumption in recent years have led to emphasis on higher efficiency, so that in many cases MOSFETs and IGBTs are used instead. However, there are also numerous cases in which bipolar transistor use dominates. We recently developed new bipolar transistors for use in such applications.

The newly developed devices are the 2SAR642PHZG（PNP type） and the 2SCR642PHZG（NPN type）, which guarantee a large collector current (pulse) ICPfor gate driving in inverter circuits and the like.

In recent years, electrification of vehicles is accelerating, spurred by environmental problems and fuel issues. Demand for hybrid vehicles and electric cars to replace conventional gasoline-powered cars is increasing, and various pieces of equipment that had not existed in gasoline-fueled cars are being installed.

Hence in order to enhance the versatility of gate driver ICs, it is increasingly common to provide a bipolar transistor buffer between a gate driver IC and a high-voltage switching device.

As an example, below is shown an inverter circuit configured using a gate driver IC, a switching device (MOSFET or IGBT), and bipolar transistors. 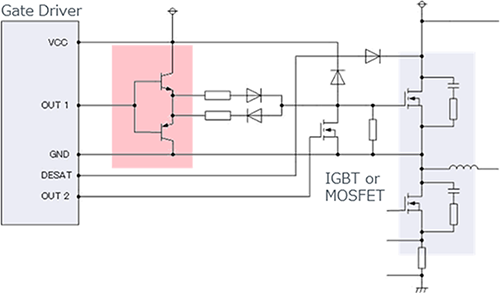 The current capacity of switching elements in the inverter circuits that are increasingly in demand for use in xEV is trending upwards, and bipolar transistors with high current driving capabilities for use in buffers are being sought. For these reasons, our newly developed 2SAR642PHZG and 2SCR642PHZG products feature specifications that reflect these market needs, and guarantee a collector current (pulse) ICP of 10 A in 1 ms. The major product specifications are shown below.