Greatly Improved Efficiency and Supplied Power, with Number of Components and footprint comparable to LDO regulators

- In succession to your summary and explanation of automotive use and secondary power supplies, please describe the features of the BD905xx-C series.

Put simply, features include high efficiency, small size, a small number of external components, and simple design. And, of course they are built for automotive use. But this alone sounds a little run-of-the-mill, so allow me to explain in more detail.

First, I'd like to emphasize that there is a surprisingly small number of external components. By incorporating the voltage setting resistances, power transistors and phase compensation circuit in the IC, only three external components are necessary. These are an input capacitor, inductance, and output capacitor. And by using high-speed switching at 2.25 MHz, the input and output capacitances can be compact devices with small capacitance values, in the range 10 µF to 47 µF.
he inductance likewise can have an extremely small value of 1.5 µH. And while I'm talking about "smallness" as a feature, the IC package is also extremely small. An HTSOP-J8 package is used, with a volume reduced by about 80% from that of conventional ones.
The size is 6.0 mm × 4.9 mm, with a maximum height of 1.0 mm. When the external components are added, the footprint area is about 225 mm2. Thus it all fits into an area of 15 mm × 15 mm, for example.

- That does seem compact. It would be easier to grasp if we had something to compare it with, though.

Compared with conventional equivalent DC/DC converters, only three external components are required, versus the 15 or so for the older models. This is clearly a dramatic reduction in the number of components. And the mounting area is only about half or so of the 400 mm2 that had previously been required.

Another important point is that the output current of an LDO regulator of about this size is at most 1 A. This is because heat generation is a problem. The BD905xx-C series models boast high efficiency, and so models of the same size can supply output currents of up to 3 A 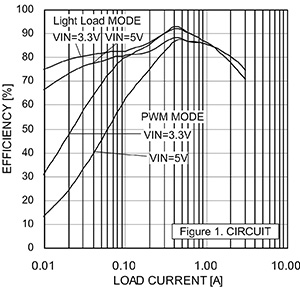 - What is the expected efficiency ?

I'll explain the actual efficiency of the BD905xx-C series using this graph. This is the efficiency for the load current of a BD90535EFJ-C with a 1.5 V/3 A output, in light load mode and in PWM mode, separately for input voltages of 3.3 V and 5 V.

- When the load is light, the efficiencies are quite different for light load mode and for PWM mode.

The control methods are different, and the objectives are also different. Light load mode provides the best efficiency over a broad range when there are large fluctuations in the load current, for example when there is both full loading and a standby state. However, to accomplish this, intermittent switching operation is performed during light loading.

- What specifically does that mean?

When the load is large, fixed-frequency PWM operation is performed, and when the load becomes light, control switches to intermittent operation.
When there is not much need for a load current, operation is partially suspended, and only the required power is supplied when necessary. This means that high efficiency can be maintained even under light loading, and the effect is particularly great when in standby for long periods of time.
However, during light loading the switching frequency is arbitrary, and the frequency of any switching noise that occurs is indefinite. For applications that are sensitive to noise, this is one factor that adversely affects the S/N ratio. 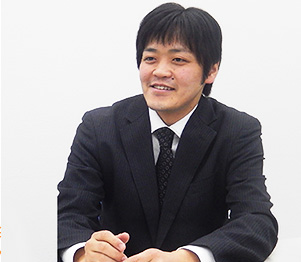 - Is this related to fixed PWM operation?

That's right. Upon selecting fixed PWM operation, intermittent operation is not performed even when the load becomes light. That is, there is no idling, and operation is continued at the same intervals. Hence operation continues under light loading even when pausing is possible, so that efficiency is decreased, but the switching noise that occurs is the same frequency component, so that noise processing is relatively easy.
In other words, the modes can be used selectively, with the light load mode used when the application demands high efficiency above all else, and the PWM mode used when efficiency can be sacrificed to some degree in the interest of reducing noise.

- We see then that the BD905xx-C series, while requiring about the same footprint as an LDO regulator and using just one more inductor as an added component, provides clearly superior efficiency, and so has the marked advantage of being able to supply more power.
However, it is said that designing switching regulators is troublesome.

It is true that conventional switching regulators require numerous external components, and so calculation of the components values and other aspects of design are somewhat troublesome.
However, the BD905xx-C series requires just three components. And, recommended components and board layouts are provided, and so to state things rather bluntly, if you use the recommended parts and design, you're already done. Design is really much the same as with LDO regulators, and is easily accomplished.

- Are there any other key points?

There's one thing I'd like to add in relation to automotive use. In relation with automotive specs, I previously explained AEC-Q100 support, operating temperatures, manufacturing control systems, and the advantages of secondary power supplies, but I'd like to add a further word about reliability.

Equipment reliability is determined by adding the failure rates and MTBF of components. Put simply, if components are all equally reliable, then the fewer the components, the higher the reliability. I have talked mainly about footprint, cost, and ease of design, but in an application such as automobiles where reliability is regarded as crucial, I'd like to emphasize that reducing the number of components while simultaneously improving performance contributes to enhanced reliability.