In order to solve the issues confronting existing AC/DC converters, ROHM has developed a BM2Pxxx series of converters. The BM2Pxxx Series encompassing a total of 24 models, with an internal output power transistor and most protective functions, delivers high efficiency surpassing the new 6.0 version of Energy Star, while offering an extremely small profile. We interviewed an application engineer of ROHM for a discussion on the new series of AC/DC converters.

Before plunging on the topic of confronting issues, let me tell you about specifications and the markets for which the BM2P Series is targeted, given that there are a wide variety of AC/DC converters with a broad range of required output power. The BM2Pxxx series can be used to construct basically up to 25W isolated or non-isolated flyback AC/DC converters. The 25W is a relatively small power supply unit, requiring 2A for 12V, and 5A for 5V. 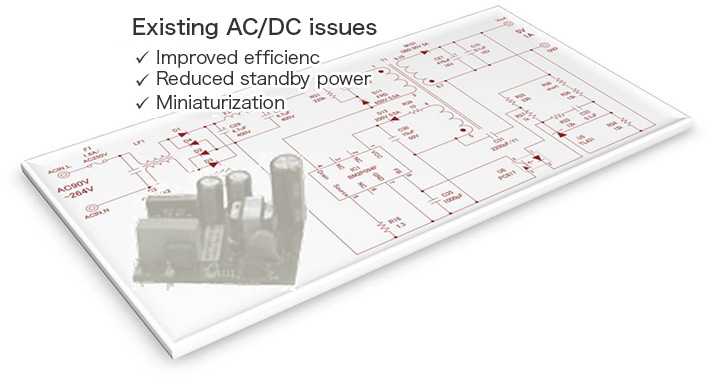 －Specific applications would help me to visualize it.

Examples include wall adapters, home electric appliances, and office equipment. For equipment in these fields in recent years, there has been a strong demand for low power consumption, improved efficiency including during the stand-by state, and miniaturization from a small footprint standpoint as the need for power conservation increases.

－It has been said that for DC/DC converters, and especially those converters used in portable devices, an efficiency better than 90% is taken for granted, and that limits imposed by physical realities are now looming large. Do you mean that such talks do not apply to AC/DC converters?

To be sure, DC/DC converters have become highly efficient and small in footprint. Remember, however, that whereas the input voltage of DC/DC converters ranges tens of volts at most, the input of AC/DC converters is AC, and a high voltage of nominal 100 VAC to 230 VAC for the types of equipment just mentioned above. Through a switching conversion process, an AC input voltage is rectified and then converted to a DC voltage. The resulting DC voltage is 140 to 320 VDC or higher, which is a 1.4-fold increase compared with the AC voltage. The handling of such a high voltage requires the use of power semiconductors, or more specifically, transistors and diodes. These devices contain room for further improvements in efficiency, or to put it more accurately, reductions in losses. 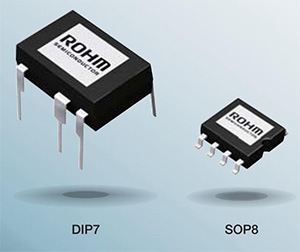 －How about miniaturization? In the example of home electric appliances, there are many slim hard disk recorders for which down-sizing is a pressing issue. That said, it appears that for refrigerators some room has been allowed, would you agree?

That is precisely the case as far as smaller electrical appliances are concerned. Although some larger appliances have less requirement for miniaturization, because refrigerators are designed to provide as much internal volume as possible relative to the outer dimensions, there is little flexibility for down-sizing, contrary to what you would expect. At any rate, smaller AC/DC converters, or power supply boards or units, provide significant benefits, such as installation flexibility, and cost reductions in the manufacture and shipping of parts for the power supply unit itself.

－AC/DC converters contain large and solid components. Is this an inherent limitation stemming from the need for high-voltage tolerance parts?

Parts and heat sink that are involved in the use of high voltages, such as rectifiers, capacitors, and switching transistors, are up against inherent limitations in terms of physical size reductions. That said, the amount of heat generated can be reduced by employing appropriate control methods and through the use of smaller peripheral components. In addition, the number of required components can be reduced by integrating protective functions into the power supply IC. The power supply IC itself, obviously, can be reduced in size. Therefore, further miniaturization is within the realm of possibility. Moreover, the job of an engineer is to make possible that which has not been possible until now.

－That being the case, the issues confronting the existing AC/DC converter are efficiency improvement and miniaturization, and the BM2Pxxx Series is intended to provide a solution for the problems, does it not?

Although subject to the presumption that the BM2Pxxx Series provides AC/DC converters up to a 25W class in performance level, what you’ve said is precisely the case. Critical tasks facing us are efficiency improvement and miniaturization. To elaborate on this point, reductions in power consumption at standby are also an overriding issue. I trust that you’re familiar with the international energy conservation standards for office equipment referred to as “Energy Star”. Office equipment must meet those standards. We developed the BM2Pxxx Series with a view toward helping to meet that goal as well.