－Well, I understand that the BM2Pxxx series was developed with the objective of resolving problems with existing AC/DC converters, specifically, improved efficiency and miniaturization. What kind of ICs are these?

The BM2Pxxx series are, essentially, ICs that enable construction of isolated flyback AC/DC converters rated up to 25W, and are also compatible with non-isolated designs. The figure on the right shows a block diagram of the IC internal circuitry and an example of peripheral circuitry. Control relies on current mode PWM. Major features include the incorporation of an output power transistor and the integration of nearly all the protection functions required of a power supply circuit. We have prepared materials summarizing the features and advantages of these devices for ease in explaining the devices in detail, and these will be used in the following discussion. Although they go into considerable detail, these materials essentially cover all the features of the BM2Pxxx series.

Features and Advantages of the BM2Pxxx Series

These functions and features were deployed with the aim of achieving 1) high efficiency, 2) low power consumption, 3) low standby power, and 4) compatibility with compact design.

These four features appear to be directly related to the AC/DC converter issues briefly mentioned above. Could you please explain key points of each in turn?

With respect to the first of these, high efficiency, a key point is the use of ROHM's original super junction MOSFET (hereafter "SJ MOSFET") as the incorporated output transistor. Both conduction losses and switching losses are greatly improved due to the dramatically reduced ON resistance compared with general purpose MOSFETs and the capability for high-speed switching. The switching frequency is related to switching losses. With faster operation, smaller peripheral components can be used, but efficiency is worsened; these devices are designed to strike a balance between the two.

In fact, the adoption of an SJ MOSFET is an essential point pertaining to miniaturization, and will be discussed in detail later.

－And how about the second feature, low power consumption?

This can be explained together with the third feature, standby power. The self- consumption current during operation of the BM2Pxxx series differs with the model but is between 500 μA and 950 μA (typ.), which is quite low for an IC used in AC/DC converters with an internal output transistor.

－I understand there are 24 models. To what are the different operating currents related?

This is the self-consumption current, and so of course it is related to efficiency. During bursts, while in operating modes under light loading or during standby, the operating current is 400 μA (typ.), regardless of the model. The efficiency under heavier loading is strongly affected by the output transistor loss, but during light loading, including standby, the self-consumption component is dominant in determining efficiency.

In other words, low power consumption depends on high efficiency across all load levels, that is, the ability to operate with low losses, and clearly the efficiency is reduced if ordinary operating currents continue to flow during standby or light loading, so that some means is needed to decrease the operating current at a light load.

We took two approaches to miniaturization. The first was making the IC itself small; the other approach was to reduce the area of the circuit overall, including peripheral components.

－Where the IC packages are concerned, the DIP7 should meet the needs of 25 W applications, and in fact appears to be on the small side. And I see that SOP8 packages, with still smaller footprint, are also available.

That's right. SOP8 devices can be used down to 8 W, but the products of other manufacturers use DIP7 or DIP8 packages for this output power level. There are probably a number of reasons for this, but it is possible that a chip incorporating an output transistor and protective circuitry supporting 8 W could not be accommodated in a SOP8 package. However, the BM2Pxxx series adopts ROHM's own SJ MOSFETs. The ON resistance per unit size is low, and so chip sizes can be made smaller for a given output power. We were able to exploit this advantage to provide a lineup of SOP8 package devices. 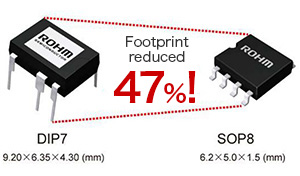 －In fact, about how much miniaturization is possible with a SOP8 package?

In terms of the foot print required by the IC, a reduction by 47%, or nearly half, is possible.

－And what about the other approach, relating to peripheral components?

Here, we have reduced the number of external components by increasing the level of integration in the ICs, and with respect to control, by raising the switching frequency in particular; it has become possible to use smaller external components.

First, an output transistor is incorporated, so one fewer component is needed. In addition, nearly all the protective functions required for a power supply are integrated, so almost no components or circuitry for protection are needed. If all of the protective functions provided by the BM2Pxxx series were configured as external circuits, in addition to resistors and capacitors, the considerable number of op-amps, comparators, and other components would occupy more board area, and some functions probably could not be realized at all. But above all, the time and trouble required to design all this would be daunting.

Where the switching frequency is concerned, through adoption of SJ MOSFETs with low switching losses and the capability for high-speed switching, it has become possible to set comparatively high switching frequencies while maintaining efficiency. As a result, transformers and output capacitors that are at least somewhat smaller can be used.

－I see. So the internal SJ MOSFETs could be said to contribute substantially to resolving these issues.

That's right. Of course this is not everything; apart from handling high voltages, such advantages as reduced power consumption and protective circuitry similar to those of the latest DC/DC converters, as well as the provision of high-speed transient response performance, represent important advances for AC/DC converters.