- For the design of a switching power supply I believe that there has been a growing recognition that selection of external components, as well as selection of power supply ICs, is of vital importance. Given an opportunity to meet with you, I’d like to hear your in-depth thoughts as a component manufacturer. In regard to capacitors and inductors, first I’d like to ask questions on capacitors.

In recent examples on power supply IC application circuits, growing numbers of manufacturers have recommended the use of multilayer ceramic chip capacitors dubbed MLCC, undoubtedly because of several advantages that they offer. First of all, would you care to provide some basic pointers on this technology?

To be sure, there has been an increase in demand for multilayer ceramic chip capacitors in the field of switching power supplies. The major reason is that the capacitor can be fashioned in a form well-suited to surface mounting. In terms of properties, in some aspects the capacitor fits well as a switching power supply, creating a growing demand as an alternative to conventional electrolyte capacitors. This being the case, let me first describe the structure of a multilayer ceramic chip capacitor.

As shown in the figure, the structure consists of sheets of dielectrics coated with powder of ceramic material one hand and electrodes on the other hand. These sheet-like components are stacked in an alternating fashion. For understanding the relationship between the structure and the static capacitance, let me explain the following equation:

As the formula indicates, the higher the in-vacuum relative permittivity ε0× relative permittivity εr, the greater the number of laminated layers n, the greater the area S, and the smaller the thickness of each dielectric layer, the higher is the static capacitance of the multilayer ceramic chip capacitor. In simple terms, the static capacitance can be boosted by increasing the height and the area. The issue we must contend with, however, is that of how to make the size as small as possible for a given static capacitance. To meet this demand, we need to increase the number of laminated layers by improving the relative permittivity while reducing the thickness of each dielectric layer, which requires sophisticated materials and fabrication technologies.

- The popular perception is that multilayer ceramic chip capacitors do not necessarily provide a large capacitance. Could you update us on what’s happening on that front?

Needless to say that we start with small capacitance capacitors. However, at present we are capable of offering up to 470 µF capacitors. In another way of looking at the situation, for a given capacitance, downsizing has advanced by leaps and bounds. The figure below shows a roadmap for my company which illustrates the relationship between static capacitance, size, and voltage rating. 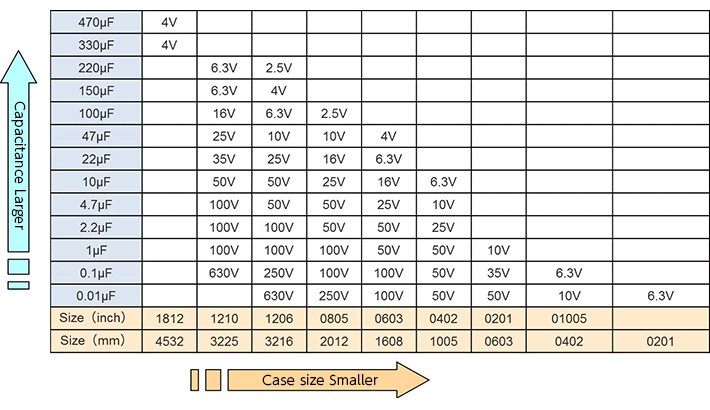 On an IC basis, DC/DC converters use output capacitors with capacitance ranging from 10 µF to several hundred µF, and it appears that the coverage has increased considerably. As you may know, the static capacitance, size, and voltage rating are all in mutually conflicting relations. We are continuing to develop new technologies to answer the need to stack many layers by making each layer thin and increasing the permittivity, as mentioned previously.

- In terms of increasing the capacitance, it seems that the multilayer ceramic chip capacitor will be some day on a par with polymer-based chip capacitors, for example. What differences set them apart?

Yes, indeed. In designing a DC/DC converter, it is extremely important to understand the differences between polymer-based, that is, functional polymer capacitors, and multilayer ceramic chip capacitors (MLCCs).

For starters, let me explain the differences in structure and material. As illustrated in the figure, whereas the multilayer ceramic chip capacitor has a laminated structure, as the name implies, the functional polymer capacitor consists of capacitors with tantalum or aluminum dielectrics and a cathode composed of functional polymer and manganese dioxide. Manganese dioxide is used in tantalum electrolyte capacitors. Although trends have shifted away from this material for various reasons, I have included it as a basis for comparison. Because different capacitors employ different materials, please see the table.

Although due to its small dielectric film thickness, the tantalum electrolyte permitted the construction of large-capacitance products, because of the use of manganese dioxide in the cathode, the tantalum electrolyte suffered from the problem of a high equivalent series resistance (ESR). However, the use of manganese dioxide offered the advantage of self-repair in the event of damage to the thin dielectric film. Nevertheless, market demands for reduced ESR have led to the rise of capacitors featuring functional polymer in the cathode. The ESR is dependent on the electric conductivity of the electrode. The table shows that whereas the tantalum electrolyte has an ESR level of 0.1S/cm, the capacitor using polypyrrole, for example, delivers a substantial improvement at 100S/cm. As for the self-repair capability, although functional polymers are devoid of that capability, any damaged part is insulated on its own accord, and this enables the capacitor to continue to function in a manner that is virtually unaffected.

By contrast, the multilayer ceramic chip capacitor, by virtue of its electric conductivity based on the materials of electrodes and laminated structure, permits an extremely small ESR and realizes a high Relative dielectric constant. As a result, efforts to achieve higher capacitance at smaller size are moving forward. Also, due to the great thickness of the dielectric film, the new capacitors offer the advantage of higher electric field strength and longer service life when compared with other technologies. The numerical data shown in the table, I believe, provide a case in point.