－ In addition to the output ripples, are there any other items that require particular attention for the output capacitor?

The output capacitor has a function, in addition to the output ripple, of maintaining regulation with respect to the fluctuations of the output load current. As you may know, when the CPU transitions from a sleep state to the run state, a large load current flows suddenly, and this condition causes the phenomenon of an instantaneous drop of output voltage.

－ Yes, I understand that the load transient response characteristic is one of the important characteristics of a power supply unit.

I’d like to discuss this topic in reference to waveforms and state diagrams. The top waveform diagram shows the output voltage (red) for a synchronous step-down converter, the inductor current (blue), and load current (pink). 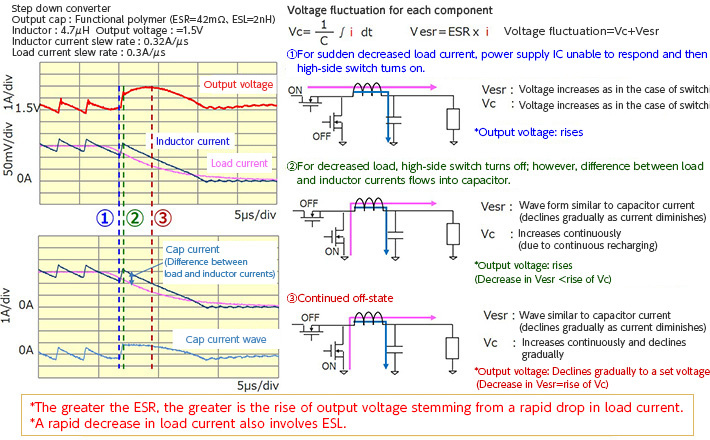 First of all, the load current begins to decline a little before the vertical broken line ① (blue), ultimately reaching zero. Imagine a situation where the load current, 3A in magnitude, virtually ceases to flow due to the CPU, for example, or something else shutting down.

And in view of the change in the load and inductor (switching) currents, let us look the output voltage. When the load current begins to fall, the output does not immediately decline to an extent that is necessary. Even though we would like to keep the high-side switch off, due to controls exerted on the power supply IC, the high-side switch unwittingly turns on, with the result that the output voltage rises suddenly (during the period marked by ① blue and ② green vertical broken lines). At this time, although the on-time becomes short to some extent, because the load current continues to diminish, at this time the power supply ends up passing a great deal of current to the output capacitor.

The change in output voltage is Vc＋Vesr, and in either case the capacitor current is involved. In particular, because the term Vesr arises in ESR × capacitor current, it is inevitable that an increase in ESR produces a large output change.

－ You have not mentioned ESL. Does it mean that it’s not relevant?

In the case of the conditions governing this example, I believe that there is no particular need to consider ESL. However, in situations where the decrease in load current is even more abrupt, the impact of ESL will present itself.

－ In this example, you used a functional polymer-type output capacitor. What differences do various types of capacitors make, especially when an MLCC is used?

Here we have data indicating the results of using various output capacitors. We have conducted experiments using three representative functional polymer types, and altogether 16 types of difference capacitances and sizes, including multi-layer ceramic (MLCC). The top waveform diagram indicates significant output voltage changes as a result of a sudden decrease in load. The waveform diagram below it provides an enlarged view of the change, which varies significantly depending upon the type and capacitance of the capacitor involved. 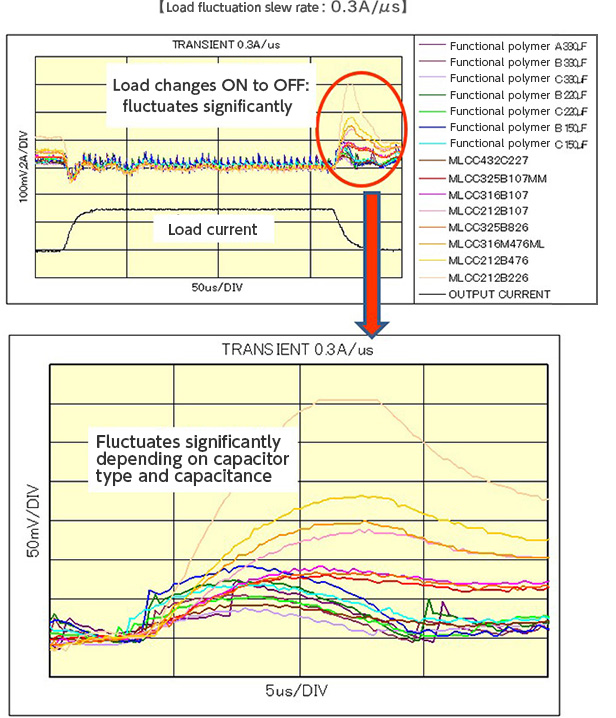 Be that as it may, because frankly the changes are not easy to see, we created a mapping view. 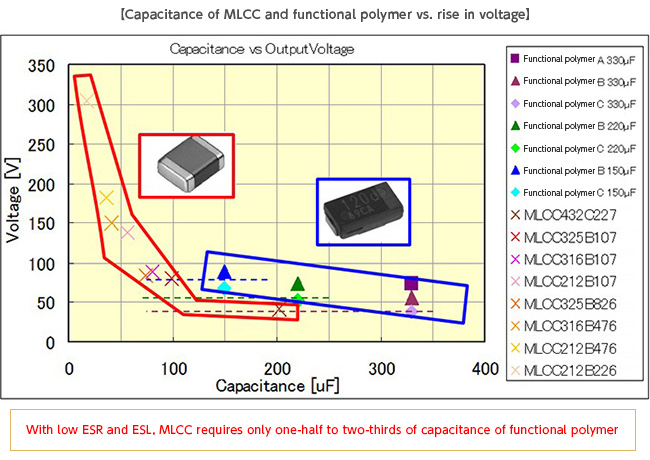 As noted above, because in this example the principal driving forces for output voltage change are Vc and Vesr, irrespective of the type of capacitor involved, the capacitor with a large capacitance, that is, consequently a small ESR, is the key to reducing the output voltage fluctuations when the load declines suddenly in this manner.

－ What advantages does the MLCC provide?

As in the case of ripples, because the multi-layer ceramic capacitor (MLCC) has low ESR and ESL values, from the standpoint of these parasitic components, for a given performance level an MLCC with a smaller capacitance than the functional polymer type can be adequate, and obviously it offers advantages in terms of size reduction. For a given job, the MLCC with a two-third capacitance of the functional polymer type will be acceptable.

－ Well said. Are there any other points we should be aware of?

In the example we just discussed, the prime factor responsible for a significant rise in voltage when the load drops suddenly lies in the control of the power supply IC employed, that is, the response characteristics that are exhibited in the event of a sudden drop in load. Conversely, the issue described here may be reduced to an acceptable level by using a type of power supply IC that can quickly respond to a decrease in load.

Another point I should mention is that if similar problems occur, they can be addressed by using an output capacitor with a small ESR. Additionally, including the case of ripples, although output capacitors with small parasitic components, such as ESR and ESL, offer advantages, in some power ICs a small ESR in the output capacitor can cause problems. This issue deserves a careful study.

What capacitor and inductor are the best for a switching power supply?
Capacitor – Part 1 –

What capacitor and inductor are the best for a switching power supply?
Capacitor – Part 2 –

What capacitor and inductor are the best for a switching power supply?
Capacitor – Part 3 –

What capacitor and inductor are the best for a switching power supply?
Capacitor – Part 4 –