Until now we have been discussing the characteristics of power supply circuits, but here we'd like to take up topics related to component mounting. Multilayer ceramic capacitors (MLCCs) are surface-mount components, and so as with other surface-mount components, there are a number of issues related to mounting. Representative among these are bending cracks and audible noise generation.

－Well, let's start by asking about bending cracks. I think cracks caused by stress in the circuit board is a typical issue for surface-mount components.

This issue is not limited to MLCCs alone. I think it is widely known that when flexing occurs in a circuit board, surface-mount components are subjected to stresses, degradation and loosening of soldered parts occur, cracks appear in components, and other mechanical degradation and damage ensue. Of course MLCCs are also affected, resulting in the problem of what are known as bending cracks.

－As a component manufacturer, I guess you'll want to say, "don't bend the circuit board".

That's an important piece of advice, but the matter cannot be circumvented so simply, and therefore we have prepared components with enhanced resistance to stress. There are two types; the first is a "resin external-electrode type" device, and the second is a "metal frame type" device.

－So you have addressed the problem from the component side.

Let's begin by briefly reviewing the mechanism of bending cracks. As indicated in the diagrams below, a surface-mount MLCC that has been mounted on a circuit board is stressed when the board flexes. In particular, the maximum stress occurs in the areas indicated by red circles in the image showing the stress distribution, that is, around the boundaries of the electrodes at the bottom. As indicated by the dashed yellow line, a crack appears toward the top part of the fillet.

In the first measure cited, "resin external-electrode type" devices, a conductive resin layer is formed between Ni external electrodes and solder (Ni/Sn) plating, in a structure that alleviates mechanical stresses. In addition to bending stresses from the circuit board, this structure is also effective for addressing internal cracks and solder degradation caused by heat cycles. Where environmental conditions are concerned as well, moisture resistance is improved, and there are other advantages related to mounting such as resistance to heat shock during soldering, reduced solder "popping" and improved coplanarity.

Below is data relating to bending cracks and heat cycles. Where bending resistance is concerned, the survival rate, that is the rate at which cracks do not occur, is plotted against the amount of flexing. In standard components, cracks began to occur from flexing of less than 3 mm, and at 4 mm cracks developed in about half of all devices; but in devices with resin external electrodes, cracks did not occur even for flexing of 6 mm. Photos of samples subjected to tests and then cross-sectioned are also shown. In standard-electrode components that are defective, as explained earlier, the cracks described above occurred from areas where the stress was greatest.

Next, we consider degradation of solder in heat cycle tests; below are the results of measurements of changes in fastening strength. As indicated in the graph, a dramatic improvement is seen for resin external-electrode components, compared with the amount of degradation for standard-electrode components. Solder degradation arises from differences in the linear expansion coefficients of the circuit board and the MLCC; cracks appear, and ultimately the component may even be separated from the circuit board.

－I can understand intuitively how a conductive resin could alleviate stress, but it appears to have quite an effect. Is there anything I should be aware of when using such devices?

The results presented here are only the results of MLCC tests performed by Taiyo Yuden. Resistance and other parameters will be different depending on the manufacturer, and so it will be necessary to confirm characteristics separately for each manufacturer whose products are to be used. In fact, the conductive resins used are different for each capacitor manufacturer, so that there are differences in elasticity and adhesion strength, for example. Of course differences in materials will appear as corresponding differences in characteristics, and so general statements cannot be made about all resin external-electrode products. 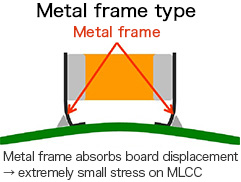 "Metal frame type" devices have been around for a comparatively long time, and so may be familiar to many. The MLCC electrodes have metal frames, and as indicated in the diagram, the metal frames absorb stress from the board. The stress exerted on the capacitor becomes very slight. Of course the effect is greater than that for resin external electrodes. Let's take a look at bending test results for devices 1206 and 0805.

In this measurement data, because defects did not occur at the maximum flexing amount of 10 mm imparted in the tests, the plotted data is gathered at the measurement limit line, shown in pink. The data is not interesting, but it should be clear that the devices have a high bending resistance. Guaranteed values for the different devices are shown, indicating the differences for devices with other electrode types. The standard type device is guaranteed for 1 mm of flexing, the resin external-electrode type described earlier is guaranteed for 3 mm, and the metal frame type is guaranteed for up to 5 mm of flexing.

－What are proper uses of the standard type, the resin external-electrode type, and the metal frame type devices?

We have looked at guaranteed flexing amount values for different MLCCs, but it is probably difficult to quantify the amount of flexing of a circuit board. There are various parameters to consider, such as the board thickness and size, the mounted positions of components, the method of board mounting, and so on. If, in the testing stage, bending cracks and solder degradation are evaluated, but problems cannot be resolved even when using the resin external-electrode type devices, then there is the option of switching to the metal frame type.

What capacitor and inductor are the best for a switching power supply?
Capacitor