－Following up on the basics of inductors, please describe the types of different inductors known as power inductors.

We explain two types of wire-wound closed magnetic circuit type inductors. One has a "drum sleeve construction", and the other has a "sleeveless construction". They are explained using the following diagram. 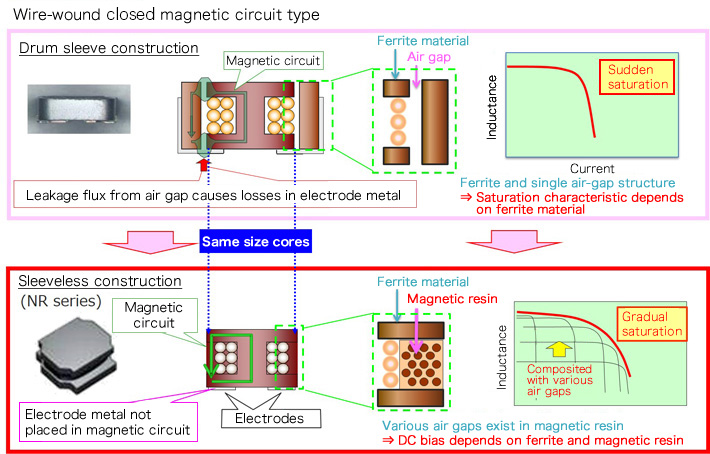 The sleeveless construction has recently come into widespread use; again it has windings on a core, and the periphery is coated with a resin with ferrite powder or iron powder intermixed to create a closed magnetic circuit. However, for the same reasons as above, an air gap is necessary. In this case, the resin enclosing the magnetic body plays the role of the air gap.

－Why is it that the sleeveless design is popular?

－So the sleeveless design is superior by virtue of its compactness and more gradual saturation.

Those are certainly advantages, but the design also has drawbacks, or at least, other aspects requiring consideration. Put simply, there is no sleeve, and the windings are simply coated with a magnetic resin, so that there is the possibility of cracking due to external forces and stresses. To cite an example from TAIYO YUDEN’s own product line, we are changing over from the previous resin to a resin with higher hardness, to enhance the strength of these components.

Through such measures, the strength of these inductors has in fact been greatly increased, but the extent of the improvement will be different depending on the manufacturer.

As a matter of fact, in the past it was thought that power inductors with a multilayer structure were impossible. They would reach saturation as soon as a smallest current was passed, and there were also heat generation issues. It was also difficult to obtain a large inductance value.

In order to improve the DC bias characteristics, innovations in the inductor construction were introduced to control the magnetic flux path so as not to concentrate the flux, and the air gap structure was created. Where heat generation was concerned, the internal electrodes were made thicker to lower the resistance values, and various other improvements were added, culminating in a multilayer type inductor that could be used in power supply circuits.

Features of these inductors include enhanced miniaturization compared with winding-type constructions. Inductance values range up to several μH or so, making them suitable for switching power supplies with high oscillation frequencies in the megahertz band. One application example is the power supplies of mobile devices.