Up to this point, we have discussed how the basic characteristics of inductors affect the performance and characteristics of power supplies. Here, however, we will explain the increasing use of metal inductors in connection with trends in power supplies, together with a discussion of the features of metal inductors, including the materials used. This is related to the increasing demand for power supplies with high switching frequencies, occasioned by the need in recent years for more compact equipment.

－Certainly as the switching frequencies of power supply circuits have risen to accommodate smaller equipment sizes, there have been more cases in which inductors with low inductances, that is, inductors that are also small in size, have been used.

As you are aware, as process technologies become ever finer, power supply voltages for ICs have continued to fall. Conversely, power supply currents have increased, in a trend that some call "lower voltages, larger currents". Where inductors are concerned, a small inductance is necessary to pass large currents, and in a power supply circuit, switching frequencies must be high in order to operate with small inductances. On the other hand, metal inductors, which early in their history were regarded as troublesome because of the difficulty of achieving high inductance, turn out to be superior with respect to both characteristics and size, so long as the inductance value is small. The graphs below illustrate the trend in IC power supply voltages and the ranges of switching frequencies, inductances and currents covered by ferrite inductors and metal inductors.

－I think there are also ferrite inductors with small inductances. What is it that makes metal inductors superior?

Well, let's begin by explaining the differences between ferrite inductors and metal inductors.

To begin with, metals have a low permeability µ, and so it is difficult to make the inductance large. However, the saturation flux density is high, that is, the DC bias current is large, and saturation is also extremely gradual. Hence the device size can be made small compared with ferrite for a given DC bias current. Moreover, in the case of metals, the inductance changes hardly at all with temperature. Where insulation is concerned, there are points to be considered that will be explained later. Frequency characteristics have been improved considerably of late, and metal inductors can be used at high frequencies. Finally, material costs are ranked "fair", but recently there has been an increase in demand, and it seems that the market has matured considerably.

As one major advantage, metal materials have high saturation flux densities, and so can be used in inductors with excellent superposition characteristics. In order to make effective use of this, improvements are needed to address the low permeability µ and inability to increase the inductance.

－And improvements have actually been made?

－The unique materials also have superior insulating properties--is this related to what you were saying about "points to be considered" regarding insulation?

This is another matter relating to the materials, so let me explain. The following table compares metal composite type devices and MCOIL™ inductors, and describes areas of improvement. 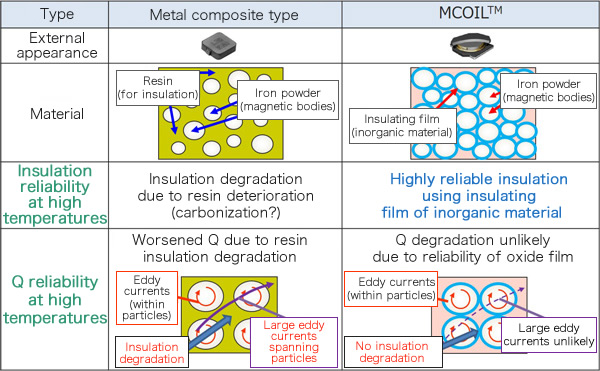 Metal composite type iron powder is insulated by an organic resin between the powder particles. On the other hand, in MCOIL™ iron powder, each particle is covered by an inorganic oxide film, so that particles are mutually insulated.

The insulating resin in a metal composite type device degrades rapidly under high temperatures in particular, and insulating properties are also worsened. As a consequence the Q value is degraded, and there is a prominent increase in losses. Eddy currents occurring in the iron powder result in losses, but if the diameters of the powder particles are larger, the eddy currents are also larger, and losses increase. In such cases, insulation between powder particles is degraded due to the resin degradation, so that a number of particles become a mass, and as a result large eddy currents flow.

The oxide film that covers the iron powder particles in an MCOIL™ differ from the organic resin in that there is almost no degradation upon exposure to high temperatures. The result is alleviation of the degradation of insulating properties that is a major issue with metal inductors, for a dramatic improvement with respect to Q degradation. And this method using oxide film is also related to the improvement in permeability μ.

－Specifically which characteristics are different?

I have prepared test data, so please have a look. This is the result of high-temperature aging tests, at 125℃ and at 150℃, of MCOIL™ inductors and the standard type (STD) and high-Q type metal composite inductors of another manufacturer. The graphs plot the changes with testing time in the insulation resistance, inductance, and Q value.

The graph on the upper left shows changes in insulating resistance. The initial values (resistance at 0 hours) should be regarded as variation among individual units. This is true for the other graphs as well. As is seen from the results after 500 hours have elapsed, in the 125℃ tests the resistances of the metal composite type inductors had dropped to about 1/100 of their initial value, and in the 150℃ tests the value dropped to below 5/10,000, so that degradation is quite clear. On the other hand, the MCOIL™ inductors exhibit hardly any degradation at all.

The graph on the upper right shows inductance. With the metal composite type, a tendency for some degradation can be seen, but the inductance of MCOIL™ is stable.

The graph on the lower left shows changes in Q. Metal composite type inductors exhibit gradual degradation at 125℃, but at 150℃, we see that degradation advances rapidly. As explained previously, when there is insulation degradation, the Q value is also worsened.

In all cases, the higher the temperature, the greater is the effect on the inductors. These are high-temperature storage tests, and so there is no self-heating, but in an actual circuit, self-heating will, together with the ambient temperature, be an important factor in degradation. Below is comparative efficiency data that indicates just how inductor degradation affects DC/DC converter characteristics.

This graph plots the measured efficiencies when samples prior to and after executing high-temperature storage tests at 150℃/500 hours were incorporated into actual DC/DC converter circuits. The solid lines are data for devices prior to testing; differences in initial values cause some differences in efficiency, but in all cases the equipment functions pretty much normally. The metal composite type inductors represented by orange are high-Q type devices, with low losses and high efficiency. It should be noted that input/output conditions are somewhat demanding, with a high voltage step-down ratio. As another measured parameter, the surface temperature of the inductors when Iout was 2 A are shown.

The results of using inductors that had been subjected to high-temperature storage at 150℃ for 500 hours are indicated by the broken lines. Some decline in efficiency is seen in the MCOILTM inductors, but they are able to output 2 A without problem. Of the two metal composite types, the blue STD device that was subjected to testing had the same surface temperature at 1 A as did the untested device at 2 A. The tested Hi-Q inductor, indicated by the orange line, failed at 1 A. In all cases, as explained above the Q degradation led to lower efficiency, and consequently heat generation in the inductor also increased, finally contributing to degradation of the Q value and reliability.

－And through these kinds of improvements, it has become possible to utilize the superior features of metal inductors in power supply circuits. But, to return to the previous discussion, could you please describe the difference with ferrite devices in more detail.

To explain this, we will again look at relevant data. First, let's look at DC superpositioning characteristics.

The graph on the left describes our inductors using ferrite material. In our previous discussion of sleeveless inductors using magnetic resin, we explained that these inductors have a comparatively gradual saturation characteristic. On the right is data for the metal-based MCOIL™ series that we have been discussing. In both cases, a DC bias current of greater than 5 A can be passed; the inductance declines gradually for the ferrite-based inductors, but as explained above, the inductance decline for the MCOILTM series is extremely gradual. In a comparison of characteristics, it is fair to say that they are about the same.

What I would like to use this data to point out is that, if a metal inductor is used to obtain the same DC bias characteristics as a 6x6 mm ferrite inductor, the metal inductor size need only be 4x4 mm. As an area ratio, this is just 44%, or less than half the unit size, and of course the height is also lower. In other words, metal inductors contribute to miniaturization, which is a key theme of this section.

Ferrite reaches saturation more easily at high temperatures, and so the temperature conditions during actual use must be factored into the design. On the other hand, metal materials see a decline in inductance with increased DC bias current, but it is important to understand that in the design stage, there is not much need to consider temperature effects in relation to saturation.

Finally, let's look at graphs of the nominal inductance in relation to the DC superposition saturation current and the temperature rise current.

Previously, we cited an example comparing inductor sizes to obtain substantially the same DC superposition characteristics. Up to a nominal inductance of about 5 µH, ferrite and metal inductors are about the same, but as the red dashed line indicates, at larger inductances, metal type inductors have smaller DC superposition saturation currents than do ferrite inductors. In other words, when the inductance is larger, ferrite characteristics are superior. This is true for the temperature rise current, shown on the right side, as well.

We have explained how metal type inductors have small µ values and cannot easily be designed to have large inductance values. MCOIL™ inductors achieve higher permeability than metal composite type inductors through improvements in materials, but even so, they do not reach the larger values of ferrite inductors. It is possible to increase the number of windings in a metal type inductor to increase the inductance, but then Rdc is larger and heat generation is increased, and such a device is not practical. At present, we believe that 4.7 µH is the boundary line for benefiting from the features of metal type devices.

－Well then, to deal with the lower-voltage, larger-current loads and the demands for miniaturization that you explained in the beginning, it makes sense to use smaller inductors, with small inductances, in the power supply. And metal inductors are a perfect match given that we are using higher switching frequencies to achieve these things.

Yes, that's a good summary. We have made improvements that draw on the attractive features of metal inductors, with a view to finding favor in the market for fast-switching power supplies. I hope that this discussion will help many readers to understand that our current metal inductors are an excellent solution for use in fast-switching power supplies.