Liberation from Photocoupler Maintenance in a Compact, Simple Design

ROHM has developed an isolated flyback DC/DC converter IC that regulates output without using output voltage feedback from the secondary side. Isolated flyback converters are widely used in power supplies for FA equipment and industrial machinery, and use photocouplers and the auxiliary windings of transformers to isolated a feedback path. However, photocouplers have short lifetimes compared with other constituent components, and so maintenance becomes an issue. The new BD7F series of converters stabilize the output without resorting to photocouplers or auxiliary windings, while simultaneously enabling compact, simplified designs, and feature stability and transient response characteristics that could not be achieved by conventional flyback converters. We asked Mr. Youju Imamura, a field application engineer of ROHM, about details of the BD7F series.

－I understand that the recently announced BD7F series is a lineup of ICs for isolated flyback converters that do not use photocouplers. To begin with, would you please explain the concepts underlying these products.

In general, isolated flyback converters require feedback of the secondary-side output voltage to a control circuit on the primary side in order to regulate the output. This output regulation using a feedback loop is a basic control method of regulated power supplies, regardless of the converter type or whether or not isolation is used.

In an isolated flyback converter, the primary side, including the input and the control circuit, is isolated by a transformer from the secondary-side output. However, if the output on the secondary side is simply fed back as-is to the primary side using wiring, there would be conduction between the secondary side and the primary side, and the device could not function as an isolated power supply. In order to maintain isolation, the feedback path must be isolated; in general, methods are used in which a photocoupler or auxiliary windings (also called tertiary windings) of a transformer, which are isolating elements, are added.

The circuit diagrams on the right are schematic diagrams showing the isolation of the feedback path, by a photocoupler above and by auxiliary windings below. As explained above, the output voltage VOUT is fed back to the FB pin of the controller IC via a photocoupler. In this circuit, several resistors and capacitors and a shunt regulator (voltage reference) are needed in addition to the photocoupler, and the photocoupler also requires a collector power supply. Thus in this case the number of components increases, and the circuit design is required.

－Yes, the design does appear to be rather troublesome.

In any case, conventional designs require added components and circuit design, with the attendant problem of larger-scale circuits.

And there is another very serious problem. Compared with other components, photocouplers have short lifetimes. Light-emitting diodes actually do emit light at times, and such long-term degradation issues as aging or burn-in result in lost functionality. In other words, the lifetime is reached. In the case of an IC, the device lifetime is rarely encountered. This is because they have lifetimes that far exceed their actual years in service. It is said that some improvements have recently been made to photocouplers in this area, but actual lifetimes vary greatly with the manufacturer and the model.

－Specifically what kind of lifetime do they have?

That's a difficult question. Lifetimes differ depending on conditions of use, and there is no single answer. Conversely, when the current being passed, temperature of use, operating ratio and the like are factored in, it may be that photocouplers are often designed for "a lifetime of 10 years of operation", say. However, not all designs include such considerations, and the lifetime of the photocoupler itself varies depending on cost and other things.

－Regardless of whether it actually is 10 years or not, if the lifetime were around that long, wouldn't this pose a problem for industrial equipment, for example, that might be in service for many years?

This is an important point. It is clear that lifetimes are short compared with ICs and other components, and so, while this may be overly simplistic, we could say that the lifetime of an isolated power supply that uses a photocoupler is equivalent to the lifetime of the photocoupler.

No, it is not. I think that anyone would want a product to operate for as long as possible. But at present, maintenance is being performed based on the assumed lifetime. In many cases, replacement is performed before entering the wear-out failure period, as in the reliability bathtub curve. I think it is rare to replace only the photocoupler. If the power supply is a module or unit, then the entire module or unit is typically replaced.

A reduced number of components and simplified design are pluses, including cost, but above all, I think the ability to extend the lifetime of the power supply, adopting longer intervals for periodic maintenance, and making lower maintenance costs possible, are major advantages. In the case of industrial equipment and the like that is in service for many years, this may be more important than simply extending the number of years of service. If this point is fully understood, I think the advantages of this series of products will be appreciated.

－What is the circuit configuration like in an isolated flyback converter that uses a BD7F series device?

The circuit diagram is on the right, and I think need not even be compared to the conventional design we looked at above. In this circuit, the feedback to the FB pin is taken from the primary-side windings of the transformer, with just a single resistor inserted. As you can see, there is no feedback path from the secondary side, and consequently there is no photocoupler or auxiliary windings, which were essential for isolation in conventional designs. 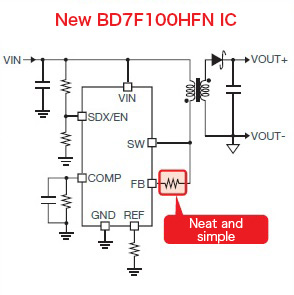 －Just looking at the circuit diagram, it looks like an unregulated isolated power supply; is the output really regulated?