ROHM has announced its SCS3 series as the third generation of SiC Schottky barrier diodes (hereafter "SiC-SBDs"). The SCS3 series further improves on the forward voltage, which was already the industry's lowest at the time when the second generation of SiC-SBDs was developed, and greatly increases the surge current capability. We asked an engineeer in charge of development of the SCS3 series at ROHM, about features of the products and the prospects for their use in various applications.

Okay. ROHM established an integrated production system for power devices using SiC, and began mass production of SiC-SBDs and SiC-MOSFETs in 2010. At that time, these were the first SiC-SBDs in Japan, and the SiC-MOSFETs were the world's first such devices. As SiC power devices, SiC-SBDs first became available on the market at the beginning of the 2000's, and it has only been about five years since SiC-MOSFETs appeared.

Let's begin with a brief explanation of the physical properties of SiC as a semiconductor material.

SiC is a compound semiconductor that is extremely stable--thermally, chemically, and mechanically stable; the parameters that are important for use in power devices are excellent. Because its dielectric breakdown field strength is roughly ten times higher than that of Si, the donor concentration of a layer necessary to secure rated voltage is high, and the layer thickness can be reduced, so that high-voltage devices can be fabricated that have extremely low resistance per unit area. Consequently it is possible to realize majority-carrier devices (SBDs, MOSFETs, and so on) with high voltage ratings and fast switching speeds. As additional features, compared with Si, SiC has a band gap about three times greater and a thermal conductivity roughly three times higher.

－So compared with Si, SiC is a semiconductor material that is extremely advantageous for increasing the voltage rating of majority-carrier devices capable of high-speed switching.

That's right. Let's look at some diode examples to explain things in more detail. This graphic is a schematic illustration of the flows of currents in SiC-SBDs, Si-SBDs, and Si-PNDs.

Here SiC-SBDs and Si-SBDs are both Schottky barrier diodes, and so the Schottky junction between a metal and an n-type semiconductor is essentially the same in both structures, and current flow is due to the movement of the majority carriers. The thickness of the SiC-SBD is shown as thin to illustrate the smaller layer thickness required to maintain the high voltage and enable low resistance, as explained above. An Si-PND structure consists of the junction of p-type silicon and n-type silicon, and both the majority carriers and the minority carriers contribute to electrical conduction.

Both SiC-SBDs and Si-SBDs are majority-carrier devices which operate through the action of the majority carriers (electrons) in the n-type semiconductor, and consequently, both feature high-speed operation during switching. In addition, SiC-SBDs achieve high voltage ratings, something that is difficult to achieve in an Si-SBD. The limit to the rated voltage of Si-SBDs under practical conditions is roughly 200 V, but SiC-SBDs with rated voltages of up to 1700 V are in mass production, and development of devices with still higher voltages is proceeding apace.

On the other hand, Si-PNDs are minority-carrier devices, and so can simultaneously achieve a high voltage and low resistance far beyond what is possible with Si-SBDs, but switching performance is inferior to that of majority-carrier devices. Among Si-PNDs, faster switching has been achieved in FRDs, but even these have poor switching recovery characteristics compared with SBDs. 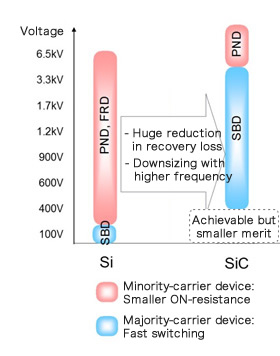 －So SiC-SBDs cover higher-voltage regions where Si-SBDs do not compete, but where there is competition with FRDs, but the recovery characteristic is far superior to that of FRDs.

That's right. These graphs indicate a comparison of the switching recovery characteristics of SiC-SBDs and Si-FRDs. The temperature dependence in each case is indicated as well.

What we first see when comparing these graphs is that the recovery characteristics of SiC-SBDs are clearly superior. Moreover, SiC-SBD exhibits almost no dependence on temperature. Earlier we briefly explained device structures, but in the case of Si-FRDs, ON operation with low resistance is achieved through the action of minority carriers. But when the device is turned off, the minority carriers contribute to the recovery current, resulting in switching losses in the application. Because SiC-SBDs are majority-carrier devices, in principle there is no recovery operation. The only recovery current flows that is due to the junction capacitance of the device, and there is almost no temperature dependence.

Recovery losses can be greatly reduced, helping to improve the efficiency of the equipment. In addition, the small recovery current means that lower noise can also be expected, and by eliminating components that would normally be needed to address noise issues, circuits can be made more compact.

－Are there any other characteristics that engineers should be aware of?

The forward voltage (VF) characteristic is also different from that of Si-FRD products. This is also better understood by viewing graphs of the characteristics.

This characteristic has both advantages and disadvantages. When Si-FRDs are connected in parallel for use, if there is concentrated flow of current in one of the diodes, thermal runaway could occur, but the VF of SiC-SBDs rises and current balance is maintained. Hence SiC-SBDs have the advantage with respect to enabling parallel connection of diodes. On the other hand, it should be kept in mind that the surge current capability IFSM is lower than for Si-FRDs.

－Could you please summarize your explanation up to this point.

First of all, SiC is a semiconductor material that is very well-suited to use in power devices, and boasts excellent characteristics. When used for Schottky barrier diodes, excellent high-speed performance can be achieved, and devices with high rated voltages beyond what is possible with Si-SBDs can be fabricated. From the standpoint of the voltage rating, SiC-SBDs have competition from Si-FRDs, but nonetheless exhibit superior recovery performance. Fast recovery characteristics contribute to improved equipment efficiency and smaller application circuits.

－Do these devices have any drawbacks?

Compared with Si-FRDs, the low surge current capability is deemed an issue. ROHM's release of the third generation of SiC-SBDs is intended to address such issues. In addition to the low-VF characteristics that have been a feature of ROHM’s SiC products, by further boosting the surge current capability IFSM and also improving the leakage current IR characteristics, we hope to be able to further expand the range of customers who are using our SiC power devices.