Wireless power supply is one. Wireless technology has become the norm for data transmission by mobile equipment such as tablets and smartphones. But nearly all such equipment uses wires, typically from chargers based on AC/DC adapters, for power transmission, as typified by USB charging. Wireless power supply technology eliminates the need for power supply cables when charging mobile equipment, and is attracting attention as a promising means of improving the connector safety, waterproof properties, and dust resistance of equipment. Because a single power supply apparatus can be used with a lot of equipment, there is no longer a need to provide a charger for each equipment, and the ability to reduce chargers can be said to have environmental advantages.

－I think that Apple announced support for this. And it seems that there is an increasing number of optional equipment for use in wireless charging.

International standards have been now formulated by industry organizations promoting the spread of wireless power supply. Infrastructure is being introduced in hotels, airport lounges, fast food outlets, in automobiles, and elsewhere primarily in Europe and North America, for use with smartphones.

－I expect that standardization will be necessary insofar as a single power supply apparatus is shared by a lot of equipment, but what kinds of standards will these be?

There are currently three main standards, the result of work by two organizations. The "Qi" international standard appeared earliest; it was formulated and is being promoted by WPC, the Wireless Power Consortium. Qi is pronounced "chee". The other two standards are those of an organization called the AirFuel Alliance. AirFuel is in fact the result of a merger between two former groups, the Power Matters Alliance (PMA) and the Alliance for Wireless Power (A4WP). At present, AirFuel is promoting two different standards: the AirFuel Inductive electromagnetic induction system that is the old PMA standard, and AirFuel Resonant, a magnetic field resonance system based on the old Rezence standard. The old standard names are often used even today, making for some awkwardness.

It should be mentioned that, although much information relating to Apple, mentioned above, has not been finalized, it appears that the iPhone8 will support Qi. As in this case, the situation surrounding which standards are being supported by which device and equipment manufacturers and service companies is in a state of flux, and some of the standards themselves are being formulated so as to support increased power levels. Where ROHM is concerned, ROHM is a full member of the WPC, has been participating in WPC deliberations from the stage of Qi standard formulation, and is taking the initiative in developing products that address market demands.

Currently, there are wireless power supply control ICs, including the BD57011AGWL and BD57015GWL for the reception/terminal side and the BD57020MWV and BD57021MWV for the transmission/charging side. All conform to the WPC Qi Ver.1.2 standard. Reference boards using these ICs are also being sold.

The transmission-side BD57020MWV-EVK-001 and the reception-side BD57015GWL-EVK-001 are reference boards that, in March 2016, obtained Qi certification for WPC Qi standard medium-power power supply, the first in the industry.

To begin with, please look at the following table, which lists our current lineup and the standards supported. This will make the following explanation easier to understand.

－So you have a full lineup of products for reception and transmission supporting power levels of 5 W or below and 15 W or below.

That's right. And among these products, today I'd like to talk about the chipset consisting of the BD57015GWL and BD57020MWV, which conform to the WPC Qi standard for medium power (EPP).

This chipset supports the 15 W medium-power standard, which is a threefold increase over the power of the 5 W low-power standard, and is capable of charging at power levels comparable to wired chargers. In addition to smartphones, they are capable of wireless power supply for applications in the 10 W class, such as tablets. The diagram below is a conceptual illustration of the system configuration based on the BD57015GWL and the BD57020MWV. Power is sent from the transmission side to the reception side by electromagnetic induction. The principle is basically that of the transformer.

－The block diagram indicates that in the BD57015GWL on the reception side, the packet generation circuit supports the PMA standard as well as Qi. This is indicated by the table above as well.

The BD57015GWL supports both the PMA standard and the current AirFuel Inductive standard. It is provided with dual modes, with automatic switching between the WPC Qi medium-power operation and 5 W PMA operation. Consequently it can be used to configure a terminal that can be charged from a charger conforming to either of these standards.

－—And on the transmission side, in addition to the BD57020MWV, a microcontroller and driving circuit are required?

That is correct. The microcontroller is necessary for use as a controller. The microcontroller is the ML610Q772 manufactured by Lapis Semiconductor of the ROHM group, provided with firmware installed to ensure operation that conforms to the Qi standard. The block identified as the drive circuit in the diagram is a circuit to drive a coil using a half-bridge or full-bridge power stage based on MOSFETs. The BD57020MWV performs gate drive of the MOSFETs.

－And are there any other features?

FOD(Foreign Object Detection), a function for detection of foreign objects, is provided as a standard feature. If for example a paper clip or some other metal objects is present between the transmitter and the receiver, the metal may be heated and cause deformation of an equipment case, and possibly even result in burn injury. In order to improve safety, the Qi standard requires provision of an FOD function. In addition, protective circuits are incorporated that provide overvoltage protection, overcurrent protection, protection from overheating, and low-voltage malfunction prevention.

－I see. Could you please tell me about the reference boards as well.

There are two kinds of reference boards: the BD57020MWV-EVK-001 on the transmission side, and the BD57015GWL-EVK-001 on the reception side. As can perhaps be guessed from their names, they are based on the BD57020MWV and the BD57015GWL. They have received Qi certification for WPC Qi-standard medium-power operation, and so are compatible with other Qi-certified products. These boards can be used to conduct various experiments and verification of operation. 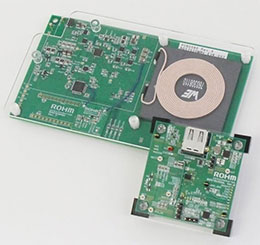 －Could you please provide a summary.

In addition to the facts that power cables are rendered unnecessary and that connector-related problems can be eliminated, wireless power supply technology also makes it possible to use a single power supply apparatus with various equipment to be charged, and so is thought of as contributing to alleviate environmental burdens by reducing the number of chargers required. Expansion of the relevant standards has enabled the supply of higher levels of power, and support has advanced from 5 W-class smartphones to tablets and other applications in the 10 W class. Through this expansion, power can be supplied to a wide variety of equipment, and further reduction of burdens on the environment are anticipated. 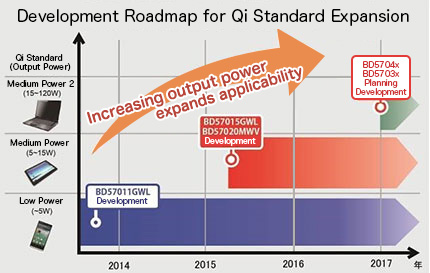 This graphic illustrates the expansion of WPC Qi standards and ROHM's development roadmap. ROHM has taken the initiative by joining standards associations and other means in order to develop products which address customer demands by anticipating market trends, while also advancing toward solutions to shared global issues such as energy efficiency and the environment.