The Key to Reduced Loss and Miniaturization in Power Applications

ROHM has made continuing efforts to develop SBDs (Schottky barrier diodes) using SiC (silicon carbide) materials that are optimal for circuits providing high rated voltages and handling large currents, and in 2010 began mass production of SiC-based SBDs, a first in Japan. At present the company is offering its lineup of second-generation SiC-SBDs, and these products are expanding their use in a wide variety of applications, including automotive. 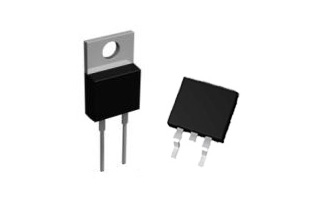 Below we will explain the advantages afforded by these features in actual use.

The reverse recovery time trr of SiC-SBDs has been greatly improved compared with Si diodes. The graph on the right compares the trr values of SiC-SBDs and Si-FRDs (fast recovery diodes). The time to recovery trr is short, the reverse current IR while the diode is turned off is much smaller, and convergence is faster. That is, the amount of reverse recovery charge Qrr is small, which means that switching losses are reduced.

When switching losses are low, two possibilities present themselves. One is that, when operating at the same switching frequency as Si-FRDs, heat generation of SiC-SBDs is reduced, and so the heat sink and board area used for heat dissipation can be made smaller. Of course this means improved efficiency. The other possibility, if SiC-SBDs can tolerate the same heat generation and switching losses as Si-FRDs, the switching operation of SiC-SBDs is faster. In the case of a switching power supply, by raising the switching frequency, smaller coils (inductors) and capacitors can be used, resulting in more compact design and reduced footprint. 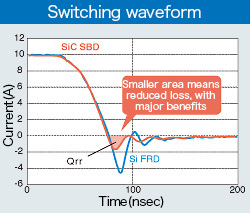 The characteristic of the previously discussed trr is also extremely stable with respect to temperature. Whereas the trr of Si-FRDs increases as the temperature rises, the trr of SiC-SBDs can be maintained nearly constant. And, there is almost no increase in switching losses even during high-temperature operation.

Further, the forward voltage VF of SiC-SBDs is about 1 V, or roughly the same as for Si-FRDs, but in contrast with Si-FRDs, the temperature coefficient is "positive" that is, VF rises with rising temperature. The solid lines in the graph of forward characteristics are for 25°C, and the broken lines are for 125°C (the different colors denote different device generations). These characteristics indicate that thermal runaway due to increased temperature will not readily occur, and help ensure safe operation under high-temperature conditions, such as when devices are connected in parallel.

SiC-SBDs offer improved VF in addition to reduced switching losses made possible by a fast trr, and thus are the lowest-loss diodes available among power diodes.

Support for smaller and more efficient power applications
We have described the features of SiC-SBDs, but now let us introduce a number of representative applications. By replacing conventional silicon diodes mainly in power-related applications, they will be key devices for boosting system efficiency and promoting miniaturization, which are critical issues today.

The product lineup includes items for automotive applications, conforming to AEC-Q101. These products are being used in onboard charging control circuits for EVs and HEVs around the world, and already have many proven track records in the market.