ROHM is putting resources into development of power devices. The SCT2H12NZ, which was recently announced and is already in mass production, is an SiC-MOSFET that achieves a high 1700 V voltage rating. With this, a high-voltage version is added to a lineup that already includes 650 V and 1200 V versions. While offering a high 1700 V voltage, this MOSFET exploits SiC characteristics to greatly lower the on-resistance. Further, by combining the device with a flyback converter control IC for SiC-MOSFETs, efficiency can be boosted considerably. In addition to the most advanced power devices, ROHM is also pressing forward with development of control devices that make full use of the performance of such power devices.

However, Si-MOSFETs with high voltage ratings exceeding 1000 V have high on-resistances, and measures to deal with heat generation due to conduction losses are necessary.

The SCT2H12NZ was developed in order to resolve such problems with auxiliary power supplies for industrial equipment.

On-resistance reduced to 1/8 that of Si-MOSFETs

Here we present an example comparing this SiC-MOSFET with a 1500 V rated Si-MOSFET used in many auxiliary power supplies of industrial equipment. The SCHT2H12NZ, a SiC-MOSFET that attains the higher voltage rating of 1700 V, nonetheless has an on-resistance of just 1.15 Ω, or 1/8 the 9 Ω of the Si-MOSFET. As a result, losses are greatly reduced, which means that heat generation can be considerably decreased, and depending on the prevailing conditions, the heat sink can be reduced in size.

Moreover, by using a TO-3PFM package, a creepage distance can be secured corresponding to the insulation required for the industrial equipment. A version using a surface-mount TO-268-2L package, which similarly secures the required creepage distance, is also being developed. By using surface mount packages, assembly by automated mounting equipment becomes possible.

The lineup of newly developed products is presented below. 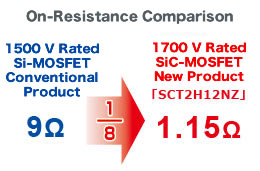