ROHM has, for the first time in the world, begun mass production of a "full SiC" power module that uses SiC-MOSFETs and SiC-SBDs manufactured by the company itself. Faster switching and greatly reduced losses are possible compared with conventional Si-IGBT power modules. The latest modules adopt third-generation SiC-MOSFETs, to achieve still lower losses.

The SM180D12P3C007 is a full SiC power module incorporating SiC-SBD, employing third-generation SiC-MOSFETs to achieve lower on-resistance and larger currents, and is rated at 1200 V/180 A, with a Ron of 10 mΩ (typ). Below, the relation of this device to existing products is indicated. 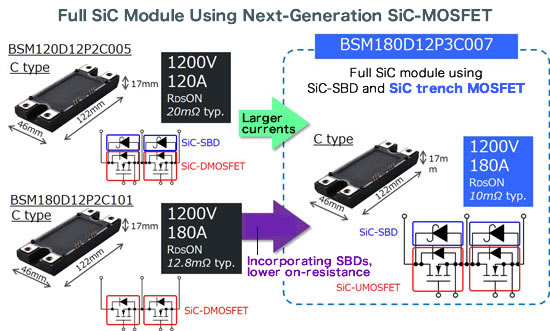 The BSM180D12P3C007 reduces switching losses far below those of an IGBT module; losses are some 42% lower than existing SiC modules. As a result, still more efficient and compactapplication products can be expected.

The following table describes the current lineup of SiC power modules. In addition to the BSM180D12P3C007 described here, new products have been added to the lineup of products using second-generation SiC-MOSFETs. Hereafter the lineup will be further expanded.