Super-junction MOSFETs are MOSFETs with dramatically lower ON-resistance and gate charge (Qg) compared with planar MOSFETs. ROHM's series of 600 V super-junction MOSFETs boast such characteristics as fast operation, low noise, and high efficiency, and are currently advancing toward a second generation. They are contributing to improved efficiency in a variety of power conversion circuits, from power supplies to PFCs and the like. 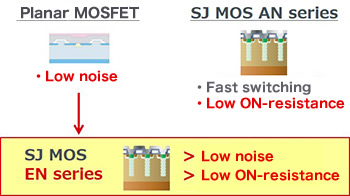 The product lineup is shown below. Multiple packages are available for each model.