As with other electronic equipment, in recent years there have been mounting demands for intelligent, compact, and highly efficient motors. Nearly 50% of the world consumption of electric power is used to drive motors, and there is an urgent need to respond to these demands.

The BD9227F is the industry's first* power supply IC capable of controlling the rotational speed of DC fan motors with the high precision that would be difficult using conventional discrete components, achieved by linear control of the output voltage according to a PWM signal generated by the MCU. Through control optimization achieved by component integration, efficiency is dramatically improved, the number of components is decreased and faster switching is possible to enable miniaturization of peripheral components, so that the footprint can be reduced drastically. (*ROHM survey as of Nov. 18, 2016)

In a conventional discrete construction, the output voltage linearity with respect to the PWM signal generated by an external MCU is poor, and there has been the problem that motor rotation speed could not be precisely controlled. The BD9227F can output a voltage which is highly linear with respect to a PWM signal, enabling precise control of the rotation speed of a DC fan motor. 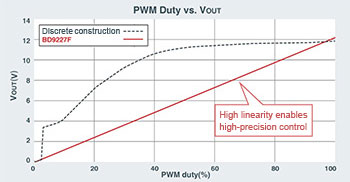 In a conventional discrete-component construction, high-speed switching operation is limited, and comparatively large inductors and output capacitors are needed. The BD9227F operates at a switching frequency of 1 MHz (typ), and so smaller peripheral components can be used. And, integration results in a dramatic reduction in the number of components, so that the footprint can be decreased by approximately 75%. 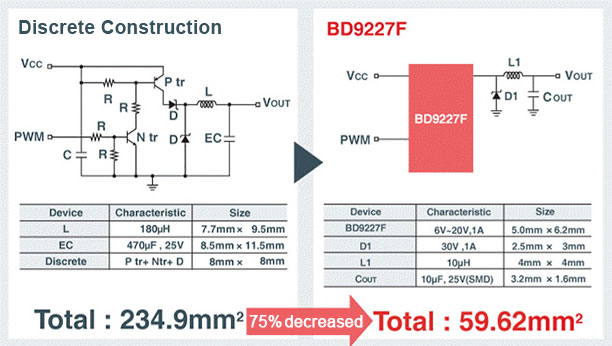 Compared with discrete configuration, the BD9227F achieves higher efficiency in all load ranges. In an example of 300 mA loading, an efficiency improvement of about 19% is possible. And high efficiency is maintained even at still higher loading. 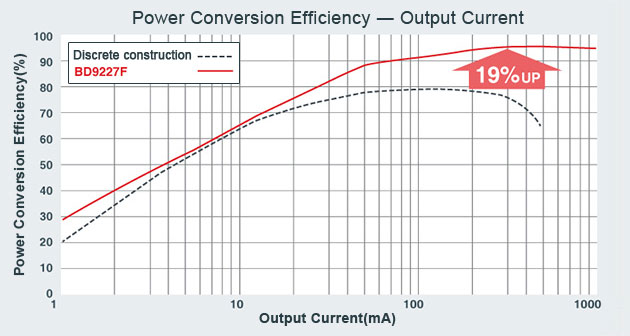 The BD9227F incorporates a p-channel MOSFET as high-side switch. As a result, it is possible to operate with a 100% duty cycle, that is, in a continuous-conduction state with no off-time. An output voltage can be generated that is extremely close to the input voltage, with minimal losses.