ROHM has developed new 1200 V, full-SiC power modules rated at 400 A and 600 A, “the BSM400D12P3G002” and “the BSM600D12P3G001”, for use in inverters and converters in power supplies for industrial equipment, power conditioners for solar power generation, and UPS products.

In March 2012, ROHM began mass production of the world's first full-SiC power module, with SiC used for all internal power semiconductor devices. Thereafter, the product lineup was extended to 1200 V, 300 A products, and the SiC power modules are being used in a wide range of fields. Through the development of a new package, the lineup of full-SiC power modules is extended to cover current ratings from 100 A to 600 A, which are the principal specifications of products in the IGBT module market. These power modules make possible dramatic increases in efficiency and reductions in size compared with general IGBT module applications with equivalent current ratings. 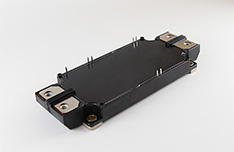 In power modules with high current ratings, extremely high surge voltages occur during switching due to the parasitic inductance of the package. When increasing the rated currents of full-SiC power modules, it was necessary to develop a new type of package, with reduced parasitic inductance to suppress such surges, in order to make the maximum use of the high-speed switching performance that is a feature of SiC power devices.

The newly developed G type package has an internal package inductance that is lower by about 23% compared with conventional packages, achieved through optimization of the internal SiC device layout, wiring pattern, and terminal structures.

As a result, surge voltages could be suppressed by 27% compared with conventional packages, and full-SiC power modules rated at 400 A and 600 A were successfully commercialized. In addition, due to the new package, switching losses could be reduced by 24% under equivalent surge voltage conditions.

In order to handle large currents up to 600 A, in addition to reducing the internal inductance, high heat dissipation performance is also necessary. By improving the flatness of the baseplate section, which makes an important contribution to the heat dissipation performance of a module, the heat resistance between the baseplate and external heat sink and the cooling mechanism in the new products could be reduced by 57%.

For information on new products, please inquire with a sales representative, or click here.