BD9V100MUF-C: A DC/DC Converter with the Industry's Highest Step-Down Ratio

In June 2017, ROHM began sample shipments of the BD9V100MUF-C DC/DC converter IC with the industry's highest step-down ratio, achieved with switching at 2 MHz, and in December 2017 announced that it would begin volume production.

Engineering samples of the BD9V100MUF-C were demonstrated at exhibits such as CEATEC in 2016, and the development had already been announced. Due to the high level of interest expressed, this device was immediately addressed in an "Ask Direct to Engineers" column (Japanese) of TECH INFO on ROHM's Tech Web, with the title " DC/DC Converter IC Capable of Direct Step-Down from 48 V to 3.3 V", consisting of two articles: Part 1: Is Direct Step-Down from 48 V to 3.3 V Possible? and Part 2: Simplifying the Power Supplies of 48 V Hybrid Systems to Cut Losses.

In this article, we shall go over the features and specifications of the BD9V100MUF-C that have been formally released. There are generally no changes to the basic functions and features described in the article mentioned above, but the specifications and ratings for the product were provisional at that time, and there have been some changes. The initial edition of the datasheet has also been released, and should be consulted for further details.

Through the use of Nano Pulse Control® technology, the BD9V100MUF-C enables the simplification of 48 V power supply systems used in mild hybrid vehicles, industrial robots, the sub-power supply of base stations, and the like, and also enables the reduction of their application sizes. Of these, the specifications for the chip place the most emphasis on automotive applications, and also support AEC-Q100 (Grade 1).
In addition, a wettable flank package is adopted to improve convenience for automotive electronic equipment manufacturers.

The reader may not have heard too much about wettable flank packages, but from several years ago they have become well known in industries related to automotive electronics. A wettable flank package is a package with solder pads that have been treated so as to enable visual confirmation of the state of soldering of a QFN or other leadless package onto a mounting board.

In order to ensure reliability, automobile manufacturers strive for 100% automated visual inspections after component mounting, but in the case of leadless packages, it is difficult to determine the soldered state externally. Methods relying on X-ray inspections are one option, but these entail cost increases, and in some cases X-ray inspections cannot be performed, and consequently this has been an unsolved problem for automotive electronic equipment manufacturers. 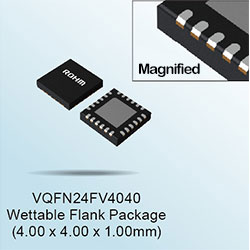 In wettable flank treatment, edges of the rear surface of the leadless package are cut, and the cut part of the pad is plated (see the package photo). As a result of this processing, if the solder adheres normally to a pad in soldering, a fillet (solder wetting) can be expected to occur on the cut part. In visual inspections, if fillets can be confirmed on the package side faces, then it is highly likely that the soldering is normal, and for this reason, wettable flank packages have begun to be adopted.

In addition to functionality, performance, quality, and reliability, ROHM continues to make efforts to improve convenience for automotive applications.

BD9V100MUF-C Key Specifications (For details, refer to the datasheet from the link below.)

BD9V100MUF-C: A DC/DC Converter with the Industry's Highest Step-Down Ratio