Full-SiC Power Modules Supplied for Use in Formula E, the Pinnacle of Electric Car Racing

ROHM has been providing full-SiC power modules for the Venturi Formula E team, which is participating in the FIA Formula E Championships 2017-2018 (Season 4), which opened December 2, 2017 and is regarded as the world's most competitive electric automobile race.
In the previous season (Season 3), ROHM concluded an official technology partnership contract with Venturi, and in that season provided SiC Schottky barrier diodes (SiC SBDs). The inverters of Season 2, which used IGBTs and fast recovery diodes (FRDs), could be reduced in size by 19% and by 2 kg in weight by substituting the SiC SBDs for FRDs. 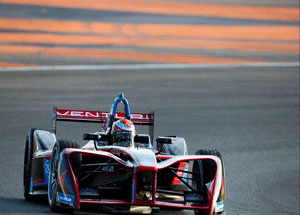 Starting from this season, which is Season 4, through the provision of a full-SiC power module that incorporates SiC MOSFETs and SiC SBDs in a module, reductions of 30% in size and 4 kg in weight over the Season 3 inverter using SiC SBDs were achieved; compared with the Season 2 inverter, which did not yet use SiC power devices, size was decreased by 43% and the weight was lowered by 6 kg.

The full-SiC power module that was newly installed in the inverter of the vehicle of the Venturi Formula E team realizes larger currents through the development of a new package that has a unique internal structure and optimizes heat dissipation. Compared with general IGBT+FRD modules with equivalent current ratings, switching losses were reduced by 75% (at a chip temperature of 150°C).

Moreover, through the high-frequency operation that is a feature of SiC power devices, further miniaturization of peripheral components becomes possible, and so switching losses are reduced and heat dissipation is decreased under high-speed operation compared with IGBTs. Consequently the cooling system can also be reduced in size, and the result is a far more compact overall system.

Formula E is a race for all-electric drive vehicles that was begun in 2014 under the sponsorship of the International Automobile Federation (FIA). Because the cars do not use fossil fuels and are environmentally friendly, races have been held on public roadways in major cities around the world, including Hong Kong, Berlin, and New York City. The key to victory is the waste-free utilization of electric power, and it is expected that technological innovations in Formula E cars will prepare the way for uses in electric vehicles in general. Despite its status as a recently founded motor sport, car-related firms from many countries are already participating in Formula E, and numerous major automobile manufacturers in Japan and abroad are announcing their participation.