ROHM's BU33UV7NUX is a boost DC/DC converter with an internal MOSFET that was developed for use in electronic equipment running on dry cells, and achieves a consumption current that is among the industry's lowest.

In mobile devices such as smartphones and wearable gear, lithium ion batteries and other rechargeable secondary batteries are primarily used. However, electronic products such as household remote controllers, electronic dictionaries, and various gadgets (toys, accessories) are more than ever using dry cell batteries, which afford higher convenience with respect to availability and the like. Fueling this trend are diversifying applications and expanding overseas markets in developing countries and elsewhere. In addition, applications are provided with increasingly sophisticated functions, and there is a redoubled trend toward still greater power use. For all these reasons, ever greater power-saving performance is being demanded of power supply ICs that use dry cells for power input. 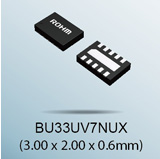 The BU33UV7NUX steps up the input voltage (1 to 3 V) of one or two dry cells to the 3.3 V required by microcontrollers. Through painstaking efforts to reduce current consumption in order to extend the time of operation of dry cell applications, a consumption current of 7 μA (typ), among the lowest in the industry for products with equivalent functionality, was achieved.

For example, if the standby load current of a remote controller that is driven by two alkaline dry cells is assumed to be 50 μA, then compared with a conventional product with equivalent functions, the dry cells can be made to last 1.3 times or more longer (extended from 540 to 715 days, for an increase of 175 days) (according to an investigation by ROHM).

The device is started by a low input voltage of 0.9 V (typ), and after startup maintains boost operation until as low as 0.26 V (typ); input of 4.5 V is possible (under recommended operating conditions). Applications using one or two dry cells, nickel-cadmium batteries, or nickel-hydrogen batteries, or a single button-type lithium battery, are supported. A battery liquid leakage detection function is also installed, positioning this product as the ideal boost solution for dry cell battery applications in particular.

*Specification values are based on the stipulated conditions. For details, refer to the datasheet.

A BU33UV7NUX-EVK-101 evaluation board for the BU33UV7NUX is available. The board manual is provided as a download, so that detailed specifications can be referenced.
Moreover, BU33UV7NUX samples and evaluation boards are being sold by online merchants, and can be purchased in quantities as small as single units. 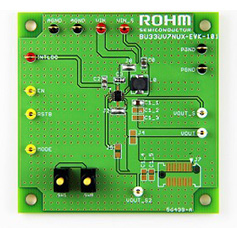