The BD70522GUL is a step-down DC/DC converter, with internal MOSFETs, that was developed for applications in mobile equipment, wearable equipment, IoT devices, and other battery-driven electronic equipment, and has achieved a current consumption of 180 nA, the world's lowest.*1 (*1: Result of a ROHM survey, as of January 23 2018)

Paramount for IoT Devices: "Driven for 10 Years by a Coin Battery"

In recent years, mobile devices such as smartphones, wearable equipment, IoT equipment, and other electronic devices driven by batteries have come into widespread use, and in the IoT field in particular, "driven for 10 years by a coin battery" has taken on paramount importance. The devices in which these batteries are installed must have improved design and compactness to secure space for the inclusion of new functions, and moreover power consumption must be reduced to the absolute minimum level possible to extend the battery lifetime. The BD70522GUL is a power supply IC with ultra-low power consumption that was developed for use in such applications through Nano Energy® technology, which melds the three advanced analog technologies of circuit design, layout, and processes in ROHM's vertically integrated production system. 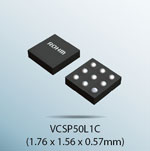 The BD70522GUL achieves the world's lowest current consumption of 180 nA through Nano Energy® technology, which combines such advanced analog technologies as ROHM's own newly developed control circuits, analog element layouts that are optimal for power supply ICs, and BiCDMOS devices based on 0.35 μm power system processes. Through such reductions in current consumption, it has become possible to extend battery lifetime by 1.4 times over existing products in the no-load (standby) state (ROHM survey). 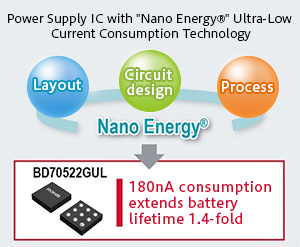 High Efficiencies Achieved over a Broad Range of Load Currents

Low-loss MOSFETs are incorporated, and a Seamless Switching Mode Control (SSMC) function is provided in which the load mode is switched smoothly and automatically according to the load current. By this means, in a DC/DC converter with a current consumption of under 1 μA, power conversion efficiencies of 90% or higher are attained over a load current range of 10 μA to 500 mA, the broadest in the industry. High efficiencies are obtained in a variety of electronic devices whether during operation or in standby, contributing to longer lifetimes for the driving batteries.

The BD70522GUL itself as well as a BD70522GUL-EVK-101 evaluation board equipped with the BD70522GUL are being sold online. Please click here for purchasing information and other details. 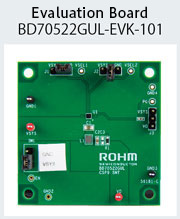