Amidst mounting demands for energy efficiency, there has been a tendency toward increasing actual power consumption in systems, and further efficiency improvements are being sought. Moreover, in high power applications using IGBTs, measures to address overshoot during switching, which can cause device faults and equipment malfunctions, are essential to secure equipment reliability. The new series of devices were developed in response to these issues.

The new series achieve industry-leading low conduction losses (VCE (sat) = 1.5 V) and fast switching (tf = 30 to 40 ns). There is a tradeoff relationship between these two characteristics, but by exploiting thin wafer technology, the wafer thickness was reduced by 15% compared with previous devices, and through the use of ROHM’s unique structure with a refined cell design, it was possible to achieve both. The following comparative graph indicates that the RGW series achieves a low switching loss of approximately 800 μJ, even while maintaining a low conduction loss of VCE (sat) = 1.5 V. 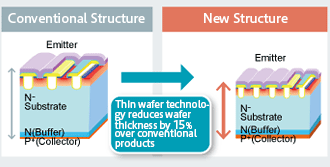 Through these improvements to characteristics, in examples of use in an interleaved PFC circuit, efficiency was raised 1.2% under light loading and 0.3% under heavy loading, compared with conventional products.

Through optimization of the overall design to realize soft switching, it was possible to reduce by 50% the voltage overshoot that occurs during switching, compared with existing devices of comparable efficiency. As a result, snubber circuits and other components that normally were necessary for overshoot suppression can be eliminated. At the same time, damage, malfunctions and the like are also alleviated, for improvements in equipment safety and reliability. 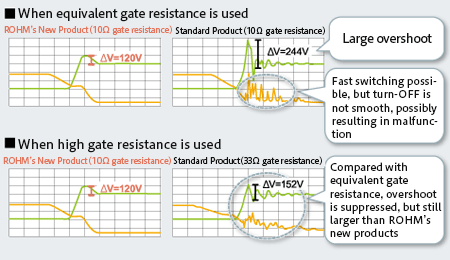 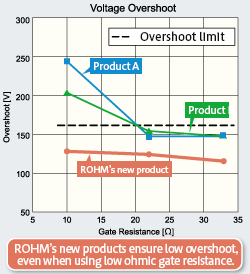 The current product lineup includes two series: the RGTV series, which features a short-circuit withstand time of 2 μs, and the RGW series, which features fast switching, for a total of 21 models (with one model in development). These products are suitable for use in UPS (uninterruptible power supply) devices, welders, power conditioners and other industrial equipment, as well as general-use inverters, converters, and other power conversion equipment for consumer goods such as air conditioners and IH (inductive heating) products.