The Industry's Highest Level of Reliability in
High-Temperature, High-Humidity Environments

ROHM has developed the BSM250D17P2E004, a full-SiC power module with a guaranteed 1700 V/250 A rating that achieves the industry's highest level of reliability*, for inverters and converters of power supplies for industrial equipment such as outdoor power generation systems, charge/discharge testing systems, and other evaluation devices.
*ROHM survey of 26 October 2018 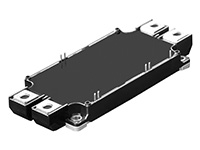 In recent years, the energy-saving performance of SiC components has led to expanded use centered on 1200 V components for use in automobiles, industrial equipment, and other areas, but rising system voltages have spurred demand for 1700 V devices. However, commercialization of 1700 V SiC components has been difficult from the standpoint of reliability, and at present IGBTs are mainly used.

In the newly developed 1700 V module, dielectric breakdown is prevented and increases in leakage currents are suppressed through the introduction of a new chip coating material and a new manufacturing method. In addition, in high-temperature, high-humidity bias tests, a high level of reliability was confirmed, with no dielectric breakdown occurring even after more than 1,000 hours of testing. Thus ROHM has released a full-SiC power module with a guaranteed 1700 V/250 A rating.

The BSM250D17P2E004 and an equivalent IGBT module were subjected to HV-H3TRB high-temperature, high-humidity bias tests, in which 1360 V was applied in an 85°C/85% high-temperature and high-humidity environment. As a result, the IGBT module underwent relatively early dielectric degradation or breakdown and a consequent increase in leakage current, leading to malfunction within the 1,000 hours. However, the newly developed SiC power module did not undergo dielectric breakdown even after 1,000 hours, and was confirmed to be highly reliable.

Driving Down Equipment Losses through Further Reductions in ON-Resistance

The BSM250D17P2E004 is entirely based on ROHM SiC SBDs (Schottky Barrier Diodes) and SiC MOSFETs. Through optimized layout of SiC SBDs and SiC MOSFETs, it was possible to lower the on-resistance by 10% compared with comparable standard SiC modules. As a result, energy losses in applications can be further decreased.