10 SiC MOSFET Models for Automotive Use Added, Completing the Industry's Most Extensive Lineup

ROHM has added a total of 10 new SiC MOSFETs conforming to the AEC-Q101 automotive reliability standard, the SCT3xxxxxHR series, for use in xEV onboard chargers and DC/DC converters. The lineup now includes 13 models, the industry's most extensive.* *According to a ROHM survey, as of March 5, 2019

In recent years there has been rapid movement toward xEV (a general term for electrified vehicles) transformation of automobiles. In particular, widespread use of electric vehicles (EVs) has become prominent, but the short ranges of such vehicles remain an important problem. In order to extend the range of EVs, there has been a trend toward increased capacities of onboard batteries, and this has been accompanied by a demand for shorter charging times. For this reason, high-output, high-efficiency automotive chargers rated at for example 11 kW or 22 kW have become necessary, and the use of SiC MOSFETs in this equipment is increasing. There is also a trend toward higher onboard battery voltages (800 V), mainly in Europe, and power devices with higher voltage ratings and lower losses are needed. 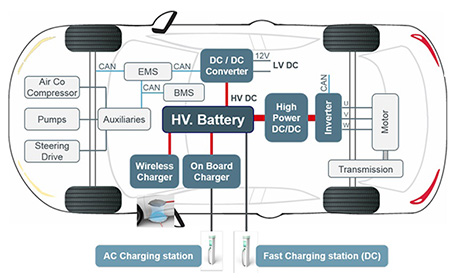 Given these market demands, ROHM is expanding its lineup of products conforming to the AEC-Q101 automotive reliability standard. The ten newly added products are SiC MOSFETs adopting a third-generation trench gate structure. Compared with their second-generation predecessors, the ON-resistance and input capacitance of third-generation SiC MOSFETs are reduced by approximately 50% and 35% respectively. With the addition of these new products, the lineup of discrete components conforming to the AEC-Q101 standard is currently the largest in the industry, at 34 models, including SiC SBDs (Schottky barrier diodes) and SiC MOSFETs. Below is the entire lineup of SiC MOSFETs conforming to AEC-Q101. Please click on the part numbers for individual product specifications.

＜Lineup of SiC MOSFETs Conforming to AEC-Q101 for Automotive Use＞

In 2010, ROHM succeeded in the world's first mass production of SiC MOSFETs, and in other respects as well has constructed a system for SiC power device development and mass production that is always at the head of the industry. With its emphasis on AEC-Q101 and other measures, early on the company established the quality and reliability required for automotive market, demand for which is expanding, and has been supplying SiC SBDs for onboard chargers since 2012 and SiC MOSFETs for onboard chargers and DC/DC converters since 2017. 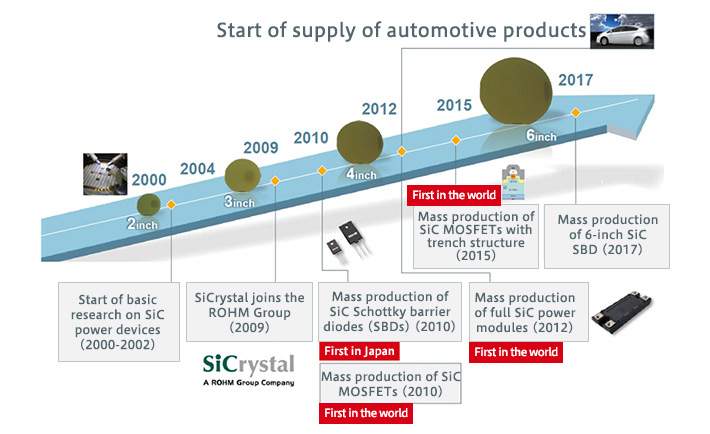 At ROHM the foremost emphasis is on quality, and a "vertical integration" system has been adopted within the group, extending from development through to manufacturing. For SiC power devices as well, an in-group integrated manufacturing system has been constructed, from wafers through to packaging, to achieve high quality and reliability. 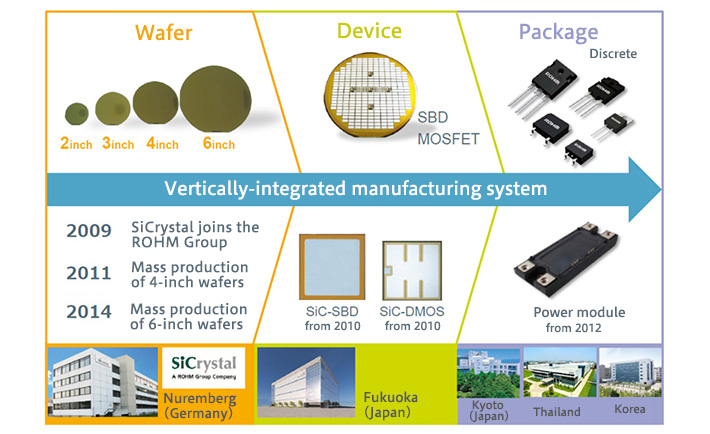 Hereafter ROHM will continue to expand its lineup of SiC power devices for automotive use.