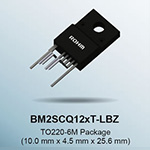 Compared with Si-MOSFETs, SiC MOSFETs offer such advantages as lower switching and conduction losses at high voltages, the ability to handle high power levels, and durability with respect to temperature changes. These are as was explained in "SiC Power Devices: Basic Knowledge" on Tech Web. In power conversion applications such as AC/DC converters and DC/DC converters, these advantages mean that higher power conversion efficiency, more compact heat-dissipating components, smaller inductor sizes through high-frequency operation, and other reductions in power consumption, number of components, and footprint, are made possible.

In particular, these advantages are driving adoption of SiC power semiconductors in industrial equipment that handles 400 V AC. In addition to main power supply circuits, higher efficiency and more compact design are also possible for auxiliary power supplies used in various control systems, where power consumption is regarded as an issue.

The BM2SCQ12xT-LBZ ICs adopt a dedicated package developed for an internal SiC MOSFET, and incorporates control circuitry optimized for auxiliary power supplies for industrial equipment, such as a gate drive circuit for driving the SiC MOSFET, as well as the 1700 V SiC MOSFET. Because of the following features, it is easy to achieve compactness, improved reliability, and reduced power consumption in AC 400 V industrial equipment.

In contrast with discrete component designs using general Si-MOSFETs, the BM2SCQ12xT-LBZ series incorporate the functionality of up to 12 components (an AC/DC converter control IC, two 800 V Si-MOSFETs, three Zener diodes, and six resistors) and a heat sink in a single package.

By greatly reducing the number of components and enabling smaller components to be used, power supply circuits can be reduced in size. And, given that SiC MOSFETs have a high voltage rating and are impervious to high-voltage noise, components for dealing with noise can also be more compact. 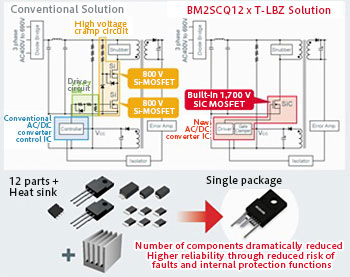 The internal gate drive circuit, optimized for SiC MOSFET driving, maximizes the performance of the SiC MOSFET. Compared with products using general Si-MOSFETs, efficiency improvements of up to 5% are achieved (ROHM survey, April 2018).

Moreover, through the adoption of a quasi-resonant method which makes possible low-noise and high-efficiency operation compared with general PWM control, the effects of noise can be minimized while attaining high efficiency.

These products can also be purchased from online vendors. An evaluation board will be sold starting in summer 2019.

A previously released controller IC without an internal SiC MOSFET, the BD7682FJ-LB, is also available. A design case study for this product is explained in "Design Example of Isolated Quasi-Resonant Converters Using SiC MOSFET” in Tech Web’s Basic Knowledge -- AC/DC Design series and should also be consulted.