RGS Series: 1200 V IGBTs Conforming to AEC-Q101 for Automotive Use

The newly developed “RGS series” is a lineup of 1200 V IGBTs conforming to the AEC-Q101 standard for automotive reliability. A total of four models were newly released, and by achieving some of the industry's lowest conduction losses, they make possible more compact and efficient applications. Together with the 650 V models already in mass production, a replete lineup of 11 IGBT models for automotive applications is now available. 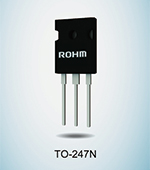 IGBTs are the Mainstream for Automotive Applications with Low Drive Frequencies, as Frequencies and Rated Voltages Continue to Rise

The development of 1200 V IGBTs for automotive applications has taken place in the midst of a recent trend toward automobile electrification. The power source for air-conditioner compressors in vehicles equipped with engines is the engine, but in electric vehicles, an electric compressor driven by motor power is used. For vehicle heating, the waste heat of the engine is used, but PTC heaters that use electrical energy are increasingly employed. A PTC (Positive Temperature Coefficient) heater is a self-regulating heater that uses the property by which resistance values rise as the temperature rises; a feature of such heaters is stabilization with low power consumption when the temperature reaches an upper limit and stabilizes.

Due to their low operating frequencies, IGBTs have been the mainstream of power devices used in the inverter circuits and switching circuits in such applications. Compressors and heaters consume battery power and affect the travel range, and so higher IGBT efficiency has been sought.

Moreover, in order to extend the range of an electric vehicle, there is a trend toward greater onboard battery capacities. In Europe in particular, there are increasing cases of high-voltage (800 V) onboard batteries, and so power devices are required to withstand higher voltages with lower losses. To this end, in addition to conventional 650 V IGBTs, there is increasing demand for 1200 V IGBTs.

Features of the RGS Series of 1200 V IGBTs

The RGS series of 1200 V IGBTs conforms to the AEC-Q101 standard for reliability in automotive applications, and is well-suited to such applications as the above-mentioned electric compressors and PTC heaters. These products contribute to improving the compactness and efficiency of applications through low conduction losses that are among the best in the industry, as well as high reliability ensured through short-circuit tolerance and high voltages.

■ Industry Top-Class Low Conduction Losses Achieved
Through optimization of the device structure, conduction losses (collector-emitter saturation voltage: VCE(sat)) at 1200 V were reduced to 1.70 V (typ, Tj = 25°C), for a reduction of approximately 10 to 15% compared with comparable products of other manufacturers (1200 V, 40 A). For applications in electric compressors and PTC heaters in particular, because drive frequencies are low, the effect of conduction losses is greater than that of switching losses, contributing to improved efficiency.

■ Broad Lineup of Products Meeting Diverse Needs
The four 1200 V models that were newly released, together with 650 V products, combine for a total of 11 products in the lineup. Both simple IGBTs and products with internal freewheel diodes (fast recovery diodes) are available.

In the electric compressor example, low-loss high-voltage IGBTs are used as motor drivers. In the PTC heater example, they are used as switches for PTC element conduction.