The SCT3xxx xR series is a lineup of trench gate structure SiC MOSFETs designed for use in applications where high efficiencies are sought, such as server power supplies, solar cell inverters and electric vehicle charging stations. The SCT3xxx xR series adopts a 4-pin package, and six models (650 V and 1200 V) have been released.

Point 1: Through adoption of a trench gate structure, finer features are possible than in a planar structure, and so a low ON-resistance close to that of the characteristics inherent in SiC can be expected.

Point 2: The TO-247-4L 4-pin package was adopted, enabling maximal exploitation of the fast switching performance of SiC MOSFETs. Compared with the conventional TO-247N 3-pin package, a cut in switching losses of about 35% is possible.

Point 3: A SiC MOSFET evaluation board equipped with a gate driver IC that is optimal for driving SiC devices as well as various power supply ICs and discrete components is available, making device evaluation simple.

Point 4: The SCT3xxx xR series SiC MOSFETs and the evaluation board are sold online and can be purchased from internet vendors.

The following diagram is a schematic illustration of the differences in construction of the newly adopted TO-247-4L 4-pin package and the conventional TO-247N 3-pin package.

The conventional TO-247N 3-pin package (left) has the drawback that the gate voltage drops due to the influence of the inductance component of the source pin, so that the switching speed declines. In the new TO-247-4L 4-pin package (right) adopted in the SCT3xxx xR series, through use of a construction in which a source pin for the gate driver (driver source) and a source pin for the power path (power source) are separately provided, the effect of the inductance component of the gate driver can be reduced. As a result, compared with conventional 3-pin packages, switching losses can be decreased in SiC MOSFETs using the TO-247-4L package. 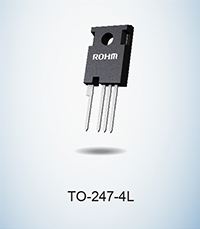 By using the TO-247-4L 4-pin package, the fast switching performance of SiC MOSFETs can be brought out to the maximum extent, so that losses upon turn-on in particular can be greatly improved. When the turn-on loss and turn-off loss are totaled, a reduction in losses of about 35% over conventional 3-pin packages can be expected.

MOSFETs are generally voltage-driven, and switching operation is controlled by turning the voltage to the gate pin on and off. Figure 1 shows an example of the general gate driving circuit in a conventional (TO-247N) MOSFET.

The driving circuit includes the inductance of the circuit board and the inductance LSOURCE of the MOSFET source pin; it is extremely important that these parameters be considered. At conventional switching speeds, an EMF (electromotive force), which is a difference in potentials caused by a current, occurs due to changes in the drain current ID that flows between drain and source.

When a voltage VG is applied and the MOSFET is turned on, ID increases, and a voltage VLSOURCE occurs across LSOURCE in the direction (I) in the diagram. This voltage is included in the driving circuit at turn-on, and reduces the voltage VGS_INT needed to turn on the MOSFET, as indicated by equation (1). Consequently, the turn-on speed is reduced.

For similar reasons, upon turn-off the IG and dID/dt in equation (1) are negative, and so a voltage increase (II) is caused across RG_EXT and LSOURCE, and a decline in the turn-off speed occurs due to the increase in VGS_INT.

Figure 2 is an example of the driving circuit in a MOSFET with the TO-247-4L 4-pin package which can eliminate the effect of this EMF. The driver source pin connects the VG signal directly to the chip on the source side, so that the effects of this EMF VLSOURCE are removed, and switching speed is improved.

When the turn-on and turn-off losses are totaled, a reduction in switching losses of about 35% can be confirmed.

What Applications are Suitable?

In recent years, the introduction of AI and IoT technologies has been accompanied by mounting demands for cloud-based services, and the worldwide demand for data centers has been expanding. In servers used in data centers and elsewhere, reduction of power consumption is a major issue as data capacities grow and performance advances. Hence SiC devices with lower losses have garnered much attention. The SCT3xxx xR series offers performance that is extremely well-suited to such applications as servers, base stations, solar cell inverters, power storage systems, and electric vehicle charging stations.

The newly released SCT3xxx xR series of SiC MOSFETs includes three 650 V models and three 1200 V models, for a total of six devices. Details of each of the models can be accessed from the part number links below.

The P02SCT3040KR-EVK-001 is a SiC MOSFET evaluation board, on which are mounted a gate driver IC (BM6101FV-C) optimized for SiC device driving and various power supply ICs and discrete components. It can be used to simplify device evaluation. 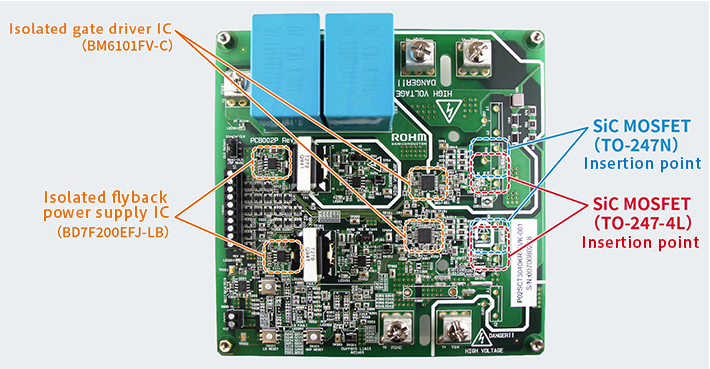 In addition to models using the TO-247-4L package, TO-247N models can also be mounted on the evaluation board so that evaluations can be performed under identical conditions. By using this evaluation board, double-pulse tests and evaluations of boost circuits, two-level inverters, synchronous rectification buck circuits, and the like can be performed. The P02SCT3040KR-EVK-001 is sold by online vendors. In addition, a support page has been made available.