ROHM recently announced the development of the GMR50 current detection chip resistor (shunt resistor), which assures an industry-leading rated power of 4 W from a device with a diminutive 5.0×2.5 mm size.
*ROHM survey, November 28, 2019

When current values are large, in general current detection resistors with a low resistance value in the range of milliohms to hundreds of milliohms are used. This is because, due to the fact that a voltage drop is used, the voltage drop when for example a 5 A current is flowing through a 10 Ω resistor is 50 V, and this is difficult to handle for a circuit that runs on 5 V and 12 V voltages. If the resistor is 100 mΩ, the voltage drop for a 5 A current is 500 mV, which can easily be handled by a low-voltage circuit. The resistor value is selected according to the current to be detected and the voltage drop, but it is also necessary to consider that a voltage drop is effectively a loss of power.

When using a current detection resistor, the resistance value, rated current, and size are all important parameters for study; in addition, precision (tolerance) and the temperature coefficient must also be considered. 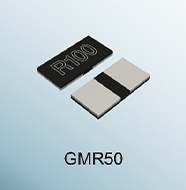 In order to raise the rated power of a current detection resistor and also reduce the physical size, long-term reliability with respect to temperature increases of the resistor must be ensured. The GMR50 achieves dramatically improved heat dissipation performance through a reexamination of the electrode structure and optimization of the device design. For example, when a 5 mΩ component is used at 2 W, the rise in surface temperature can be reduced by 57% compared with general 5025 size components. 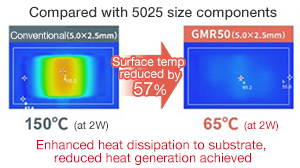 The GMR50, even with its compact 5.0×2.5 mm size, ensures an industry-high 4 W rated power at a pin temperature of TK=90°C, and a rated power of 3 W when the pin temperature is TK=110°C. The device is a size smaller than conventional 4 W components, for space savings that include a 39% reduction in footprint. 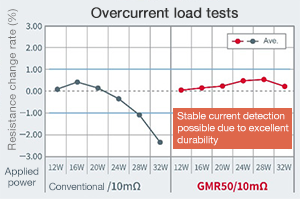 Excellent Temperature Coefficient of Resistance Achieved Even at Low Resistances

By adopting a highly functional alloy material as the resistive body metal, the GMR50 achieves an excellent temperature coefficient of resistance (TCR) of between 0 and +25 ppm/°C at the low resistance value of 5 mΩ. Thus the effect of ambient temperature changes is minimized, and stable and precise current detection is made possible. 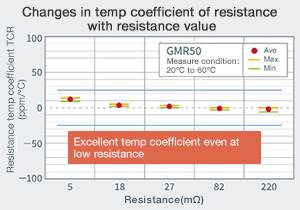 ROHM is strengthening design support for thermal simulations and the like. Through advance estimation of the rise in temperature when substituting the GMR50 for a currently used component, design do-overs can be reduced, and development time can be shortened.

For example, it can be confirmed that, in a circuit in which two conventional components (size 5025) had to be used in parallel, a single GMR50 is sufficient to suppress rises in surface temperature more effectively. Thermal design can also be supported through simulations that include power supply ICs, SiC MOSFETs, IGBTs, and other peripheral components in addition to resistors. Thus ROHM, as a diversified semiconductor manufacturer, provides a comprehensive design solution.