ROHM has developed 1200 V fourth-generation SiC MOSFETs that are optimal for automotive power train systems, including the main inverters, as well as power supplies for industrial equipment. These fourth-generation SiC MOSFETs achieve the industry's lowest* on-resistance, and are anticipated to provide support for high-efficiency, miniaturized and lightweight electric drive systems in next-generation electric vehicles (xEVs), for miniaturization and improved efficiency in the main inverter systems that are the core of vehicle propulsion, and for higher battery voltages (800 V) and reduced charging times accompanying the increased battery capacities of electric vehicles (EVs). At present, bare chip samples can be provided.
*ROHM survey, June 17 2020 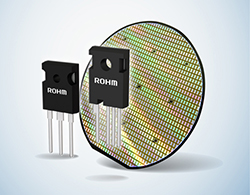 In 2015, ROHM succeeded in the world's first mass production of SiC MOSFETs adopting a proprietary trench structure, and has persisted in efforts to improve the performance of SiC power devices. Reduction of the on-resistance involves a tradeoff with a shorter resulting short-circuit withstand time, but in the newly developed fourth-generation SiC MOSFETs, by further developing a proprietary double-trench structure, ROHM succeeded in lowering the on-resistance by about 40% per unit area compared with current devices, without sacrificing the short-circuit withstand time. 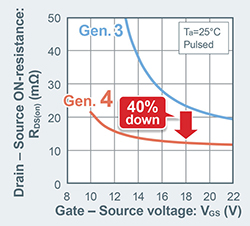 Generally in MOSFETs there is a tendency for various parasitic capacitances to increase as the on-resistance is lowered and larger currents are passed. Because switching losses grow as parasitic capacitances increase, limits are imposed on the fast switching operation that is normally a feature of SiC. In these fourth-generation devices, however, by dramatically reducing the gate-drain capacitance (CGD), it was possible to reduce switching losses by roughly 50% compared with current devices. 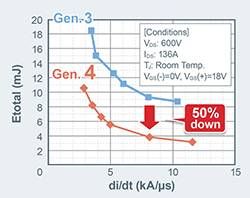