ROHM’s SiC Schottky barrier diodes (hereafter “SiC-SBDs”) have advanced to the third generation with the recently announced “SCS3 series”. With each generation, ROHM’s SiC-SBDs have marked further improvements in various characteristics, chief among them lower forward voltages. The second-generation SiC-SBDs that are currently in volume production have achieved a forward voltage VF of 1.35 V at 25°C. Moreover, the third-generation SCS3 series has further improved the VF characteristic, while dramatically improving the surge current rating IFSM.

In order to improve the surge current rating IFSM, the SCS3 series, as the third generation of SiC-SBDs, adopts a JBS (Junction Barrier Schottky) structure. In addition, the low-VF characteristic achieved in the second generation was further improved, to reduce losses. As a result, the ability to withstand the surge currents that occur in irregular equipment operation and the like is further improved, so that clients can use the SBDs in their applications with even greater confidence than before.

In its second-generation SiC-SBD lineup, ROHM achieved what was at the time the industry’s lowest forward voltage, VF = 1.35 V at 25°C, and 1.55 V at 150°C. The third-generation devices that have been newly developed offer the same VF of 1.35 V at 25°C, but ROHM succeeded in lowering VF at 150°C to 1.44 V. As a result, it is possible to further reduce conduction losses under high-temperature conditions, for even higher efficiency. 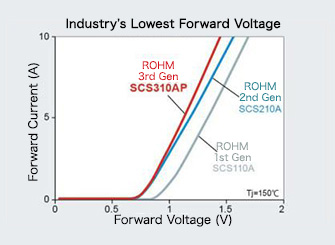 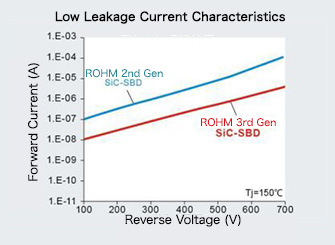