The BD18336NUF-M is an LED driver developed for socket-type LED lamps, adoption of which has been increasing recently for use in the daytime running lamps (DRLs), position lamps, rear lamps, and the like for automobiles. Using linear step-down constant-current driving, in essence up to three series LED lamps can be driven with the 12 V battery of the vehicle as input. First the features of the device are indicated.

The BD18336NUF-M is equipped with a low-voltage current bypass function, so that a single chip can enable safe lighting when the onboard battery voltage has dropped. This is an industry first. (ROHM survey, March 31 2020)

In order to drive LEDs in series using a step-down LED driver, the input voltage must be at least equal to the sum of the LED forward voltages plus the dropout voltage of the driver. The nominal 12 V voltage of onboard batteries fluctuates considerably, and depending on drops in the battery voltage, the above condition may fail to be satisfied, so that LED lighting can no longer be maintained.

By means of the low-voltage current bypass function, when the voltage supplied by the onboard battery falls to 9 V, the BD18336NUF-M bypasses one among the three series LEDs to light two of the lamps. As a result, LEDs can continue to be lit. The voltage at which operation of this function starts and the interval of operation can be set using three external resistors, enabling use in a wide range of applications. 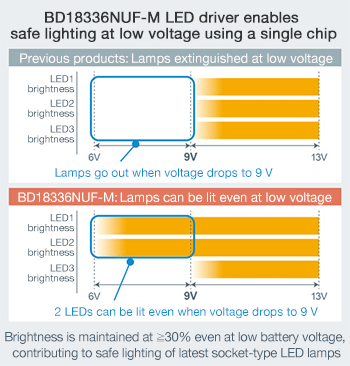 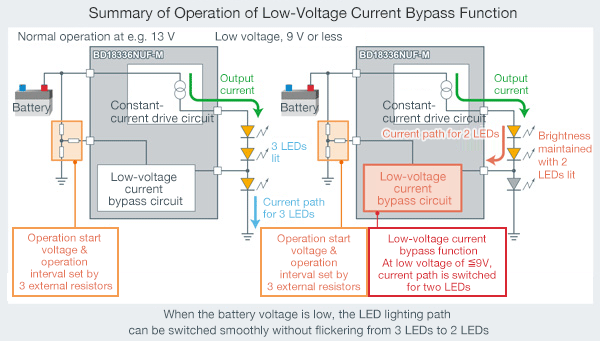 In onboard LED lamps, numerous electronic components are mounted on module boards to achieve varied designs and advanced functionality. But due to recent emphasis on maintainability, socket-type LED lamps have appeared. However, a problem with such socket-type lamps is the difficulty in reducing the socket size, so that design flexibility is limited. 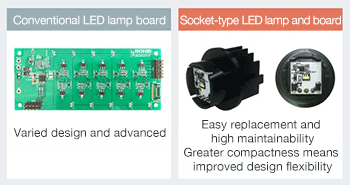 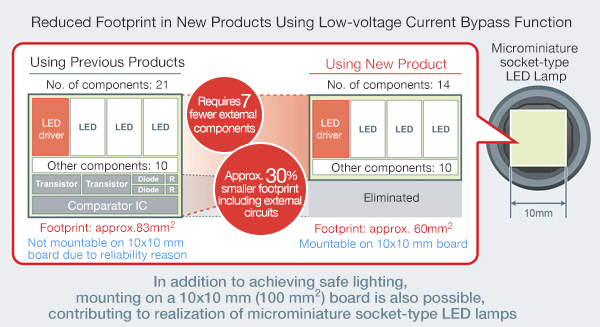 The BD18336NUF-M implements the low-voltage current bypass function in a single chip, and so it is possible to eliminate seven external components from circuits that use conventional products which require comparators, transistors, and the like, and consequently the footprint can be decreased by about 30%, including external circuits. As a result, mounting on a 10×10 mm LED module board is possible, paving the way for the microminiature socket-type LED lamps that has been sought in recent years.

The BD18336NUF-M is equipped with an output current derating function that uses an external thermistor to reduce the output current and suppress heat generation when the LED temperature is high. Using this function, white LEDs that tend to get hot can also be driven, enabling use in DRLs (daytime running lamps) that employ white LEDs in addition to the rear lamps and position lamps that use red and yellow LEDs. 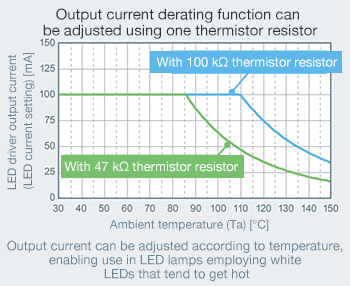 Functional Block Diagram of the BD18336NUF-M and Application Circuit Example

Below are shown a functional block diagram and a basic application circuit example, as well as the main specifications. For further details, please refer to the data sheet. 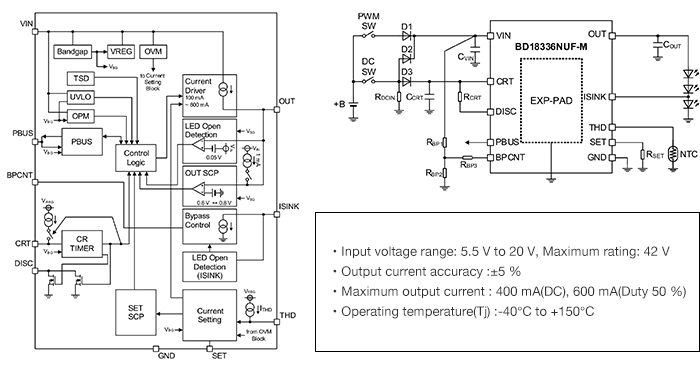