“Nano Cap™” is a proprietary ROHM power supply technology that achieves stable control even when the output capacitance of a power supply circuit is on the order of nanofarads (nF). In an example of a linear regulator provided with Nano Cap technology, stable control is made possible with an output capacitance of 100 nF (0.1 μF), so that if a bypass capacitor (generally 100 nF) is present at the power supply pin of an ordinary load (a microcontroller or other IC), the need for a linear regulator output capacitor is effectively eliminated.

Nano Cap is a power supply technology that combines three ROHM techniques for analog circuits in the areas of circuit design, layout, and processes. Through improvement of response performance in analog circuits and by eliminating to the extent possible parasitic components in internal circuits due to internal wiring, amplifiers and the like, output capacitor values can be reduced to 1/10 or less those in conventional devices. 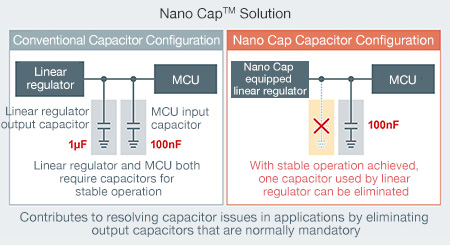 Shown below is a comparison of the load transient responses for a linear regulator equipped with Nano Cap and a conventional linear regulator supporting a 100 nF output capacitance. Characteristics are compared for output capacitors of 1 μF and 100 nF given an output voltage of 5 V and load fluctuation of 50 mA. 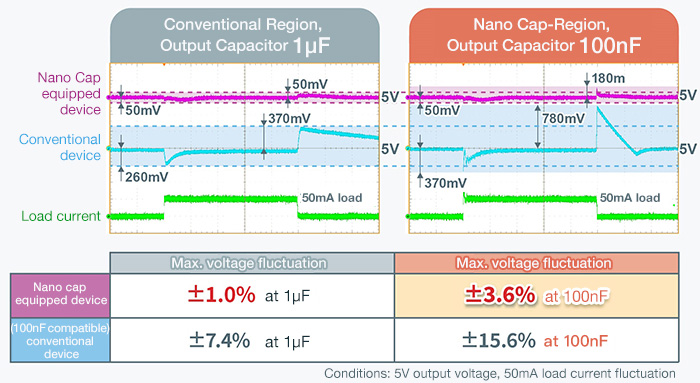