In recent years, it has become necessary to address environmental problems as a global issue, regardless of the specific field. Where power supplies are concerned, there is an increasingly urgent need for energy conservation that, apart from more efficient power conversion, entails establishing regulations relating to standby power consumption and the like. In addition, there are also mounting demands for reduction of industrial waste, which is another aspect of alleviating environmental load. With this as background, We asked Mr. Ryo Kato of ROHM ,about engineering trends in power supplies to reduce environmental load.

－It has become essential that we address energy conservation on a global scale, and where power supplies are concerned, it has been some time since improvement of energy efficiency has been the first consideration, but lately we hear that there is a strong demand for measures to reduce industrial waste with respect to power supplies as well. Please begin by explaining these circumstances.

－I see. Well, could you please explain these one at a time, in detail. First, with respect to increasing efficiency, I had the impression that efficiency has already reached a fairly high level.

In the DC-DC converters that are installed in electronic equipment and other products, it is not unusual for high efficiencies of around 95% or so to be achieved, and so it certainly can be said that efficiency levels are fairly high. However, where AC adapters and other AC-DC converters are concerned, although efficiency has improved quite a bit through widespread use of switching methods, the efficiency of nearly all products still languishes at 80 to 90% or so.

－And so it is important to improve AC-DC conversion efficiency, which involves large amounts of electric power.

That’s right. The annual production of electric products increases with each passing year, and the amount of electric power used also increases in proportion to this. At present, some five billion electric products are manufactured each year, and nearly all of these are provided with power supply modules or power supply circuits. If the losses in these power supplies could be improved by just 1 watt, a simple calculation indicates that power use could be reduced by some five billion watts. This is equivalent to the power produced by five nuclear power plants, and so it is easy to see that an enormous amount of energy could be saved.

－Considering this really brings home the sense of urgency.

Given this state of affairs, the standards associations of various countries are strengthening their regulations relating to power-supply conversion efficiency, and so there is an increasing need to develop power supply modules and circuits that will clear these new standards and regulatory hurdles.

－What kinds of regulations, for example?

One example related to AC adapters is the efficiency regulations of the U.S. Department of Energy (DOE). These were announced in February 2014, and were implemented from February 2016. The AC adapters and other external power supplies that they cover must meet these strict standards in order to be sold within the U.S. As indicated in the table, products are classified by rated output power, and the average efficiency during operation and power consumption under no-load conditions are specified. 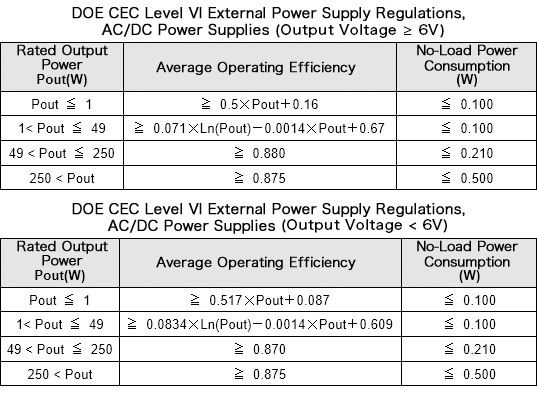 Then from the table above for output voltages of 6 V or above, because the output power is 40 W, the second row is applicable. Calculating gives an average efficiency of 87.6% or higher, and the power consumption under no-load conditions must be 0.1 W or less. This is essentially not achievable unless the AC adapter uses a switching method; in fact these conditions are fairly demanding even when switching is used.

－So does this mean that in order to meet these regulations, engineering solutions to achieve still higher efficiencies will be needed?

It is expected that products that use even more efficient technologies and methods will be needed. Conventional AC-DC converters have tended to be based on diode rectification, using diodes as the rectifying elements for reasons of circuit simplicity and relatively low costs. Efforts to raise the efficiency with diode rectification method have mostly relied on improvements in the characteristics of MOSFETs and other switching elements as well as rectifying elements such as diodes, but in future it will not be possible to satisfy the demands of recent years merely by improvements to power devices.

There is a limit to what component technology can achieve in order to resolve these issues. Hence synchronous rectification method is being adopted as a circuit technology capable of still higher efficiencies.

－In DC-DC converters, there has been a history of dramatic improvements in efficiency through shifts from diode rectification to synchronous rectification methods. Can this be thought of as similar?

In essence it’s the same approach. Operation is synchronized to primary-side switching, turning the MOSFETs that are the secondary-side rectifying elements on and off. By using MOSFETs instead of diodes as the rectifying elements, the conduction losses due to the Vf of diodes correspond to the voltage drop due to the MOSFET ON-resistance and Ids. As you probably know, the ON-resistance of MOSFETs used in synchronous rectification is extremely low, generally on the order of 10 mΩ, and so a sharp reduction in losses becomes possible. This is the same as the approach taken with DC-DC converters. 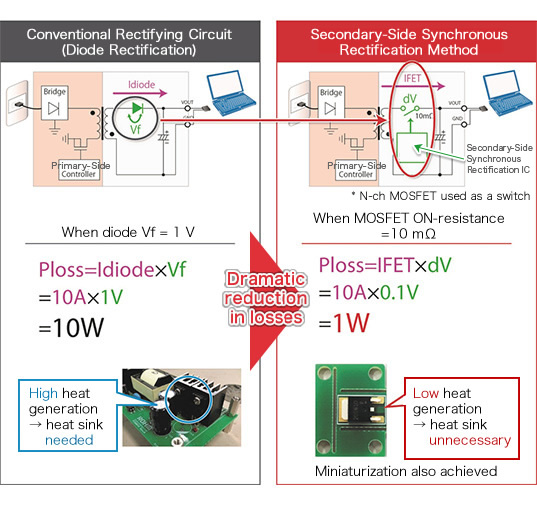 －I see. Well then, could you please explain some specific solutions.