－Before turning to the subject in question, we had first asked about quite a lot of basic matters, but from here on I would like to talk about third-generation SiC-SBDs. The SCS3 series represents the third generation of these devices, but could you please summarize the history of the device generations?

I was grateful to have an opportunity to explain basic matters first. The evolution and features of the third-generation devices will be easier to understand once the reader is familiar with the basic characteristics and performance of SiC-SBDs.

The first generation was the SCS1 series, which went into mass production in April 2010. This was the first volume production of SiC-SBDs in Japan. The second generation was the SCS2 series, announced in June 2012; SCS2 series products are still being used by many of our customers. Nearly 50 models are being mass-produced and supplied, including differences in packages, current specifications, and the like. The third generation is the SCS3 series, announced in April 2016. The number following “SCS” indicates the generation.

－Well then, could you please explain features of this third generation of SiC-SBDs.

Please have a look at the graph on the right. Through innovations in manufacturing processes, the second generation of SiC-SBDs had a VF reduced by about 0.15 V from the previous 1.5 V to achieve what was at the time the industry’s lowest VF, 1.35 V, even while maintaining the same leakage current IR and recovery characteristics as in the first generation. A lower VF contributes to lower conduction losses in the application equipment. 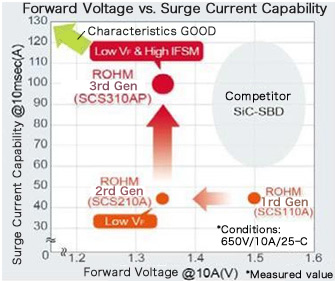 In order to enhance the surge current capability and improve the leakage current IR, the third generation of SiC-SBDs adopts a JBS (Junction Barrier Schottky) structure. A JBS structure is essentially a structure that is effective for improving the surge current capability and the leakage current IR, and using a JBS structure, the low-VF characteristics of the second generation of SiC-SBDs could be further improved, too. The typical value at Tj = 25°C is about the same at 1.35 V, but the value at Tj = 150°C is a low 1.44 V, some 0.11 V lower than the second-generation SiC-SBD products. This means that conduction losses at high temperatures are reduced, and operation in high-temperature environments is even more effective.

－It seems that there have been considerable improvements where the surge current capability and leakage currents are concerned.

The surge current capability is as indicated by the ratings in the table; it has been improved more than twofold, from the 38 A of the second generation of SiC-SBDs all the way up to 82 A. With the introduction of the JBS structure, and the development of processes and device structures that maximize surge resistance, a dramatic improvement in surge current capability was achieved. 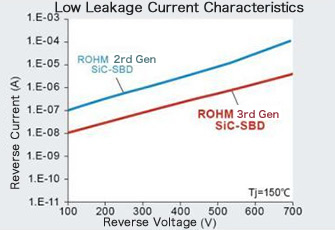 －What is the objective of these improvements in performance and characteristics?

Compared with Si diodes, it is expected that applications using SiC-SBDs will have lower losses. In addition, power devices are products that handle high voltages and large currents, and customers want to be able to use them without worrying about these issues. Improvement of the surge current capability is a response to these market needs.

There are no particular limits here, if it’s a high-efficiency application. The type of application where the greatest use is anticipated is power supply devices, and in particular PFC power supplies. For example, in addition to improved efficiency, higher surge current capabilities are sought in servers and high-performance PCs and the like. SCS3 series products, by improving on the forward voltage characteristics of the second generation, promise further boosts to efficiency. And, the surge current capability has been more than doubled, so that the safety margin with respect to unforeseen anomalies and other issues can be further extended. 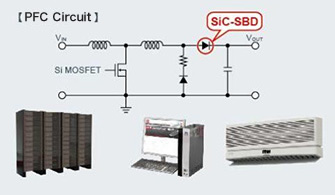 －So what is the lineup of SCS3 series products?

The lineup initially announced by ROHM was three products ranging from 6 A to 10 A, in a TO-220ACP package; at present five models are in mass production, and we are further expanding our package offerings, for a total of 15 different products. In addition to the TO-220ACP packages using through-holes, there are plans to offer TO-220FM and surface-mount TO-263AB packages, so that our customers can select packages according to the mounting method and space constraints.

Also, although the third generation of products has been announced, we will continue to expand our lineup of second-generation products as well, so that customers can choose products according to usage conditions and the required specifications.

－Together with the basics of SiC-SBDs, I think this pretty well clarifies the process of evolution up to the third generation of devices. Thank you for your time.