What are diodes? - Features of Si Schottky Barrier Diodes

As the second section on Si diodes, we explain the features and applications of Schottky barrier diodes (hereafter "SBDs").

It was explained last time that Si-SBDs are diodes that use a Schottky barrier resulting from a junction (called a Schottky junction) of the silicon with a metal called a barrier metal, instead of a PN junction. The characteristics of a Si SBD differ depending on the barrier metal type. And, devices may or may not be suited to a given application depending on these differences in characteristics. The following table summarizes the features and suitable applications for different barrier metals. In the table, an "×" indicates that performance is inferior or the device is unsuitable, compared with other devices.

An SBD that uses titanium features an extremely low VF, but the reverse leakage current IR is somewhat high compared with other devices. Consequently more heat is generated, making these devices unsuitable when the ambient temperature is high. As explained later, these devices tend to undergo thermal runaway. Because of the low VF, there are low conduction losses and only a small voltage drop, and so these devices are suitable for use in battery-powered circuits.

Molybdenum-based SBDs balance the VF and IR values. They are often used in DC/DC converter circuits.

SBDs using platinum have extremely low IR values and generate little heat, and so are suited to uses at higher temperatures. For this reason, they are favored in automotive equipment applications.

Other diodes mean general-use PN-junction rectifier diodes. These have small IR values that can be neglected in almost all cases. In contrast, the IR values of some Si-SBDs cannot be ignored. This is an important point when contemplating use of Si-SBDs.

Next, the following graphs show specific characteristics of the SBDs, represented by circles (good) and triangles (average) in the table. For example, we see that titanium devices have an extremely low VF and a large IR value.

Here, we explain thermal runaway, which is an important phenomenon for study when using Si-SBDs. Thermal runaway is a phenomenon in which heat generation causes the Tj maximum rating of a diode to be exceeded, culminating in device failure in the worst case. As explained above, losses due to the IR of a Si-SBD cannot be ignored. Heat generation is the product of the IR and the VR (reverse voltage), that is, the reverse power loss due to leakage currents multiplied by the thermal resistance. This is the same as in an ordinary heat calculation, and so a titanium SBD, with a large IR value, is particularly disadvantageous. The IR tends to increase as the VR rises, and has a positive temperature characteristic, causing it to rise with the temperature (see the previous explanation). Thermal runaway may occur due to an increase in Tj caused by self-heating (or by a rise in the ambient temperature), causing the IR value to increase, leading to further heat generation and a further rise in IR. Of course, a condition for thermal runaway to occur is that the amount of heat generation is greater than the amount of heat dissipation.

In order to prevent thermal runaway, the thermal design must be adequate to enable heat dissipation even when heat is generated under various conditions. Below are a few important points relating to thermal runaway.

Conceptual Images of Applications for Different VF and IR

Finally, we present conceptual images of diode characteristics and applications suited to such characteristics. They should be used as references in design. 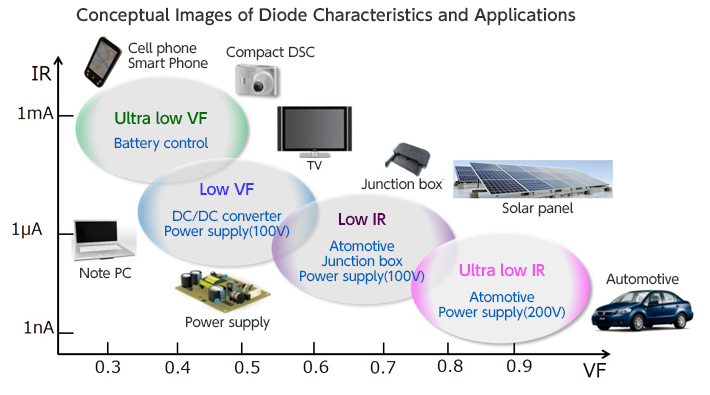 ・Si-SBD characteristics differ depending on the barrier metal.

・It should be recognized that IR values of Si-SBD are sufficiently large that they cannot be ignored.

・Thermal runaway remains a real possibility, so the thermal design should be verified adequately.