"IGBT" is an acronym of Insulated Gate Bipolar Transistor. As a hybrid of MOSFETs and bipolar transistors, they serve as power transistors that combine features of both. IGBTs are of two types, N-channel and P-channel; here we used in our example N-channel IGBTs, which are currently the mainstream.

Below are shown the circuit diagram symbol of an N-channel IGBT and the equivalent circuit of the device. Some equivalent circuits provide more detail, but here a comparatively simple circuit is shown to aid understanding. The actual device is somewhat more complex, including the structure. The structure and other aspects will be described below in greater detail. 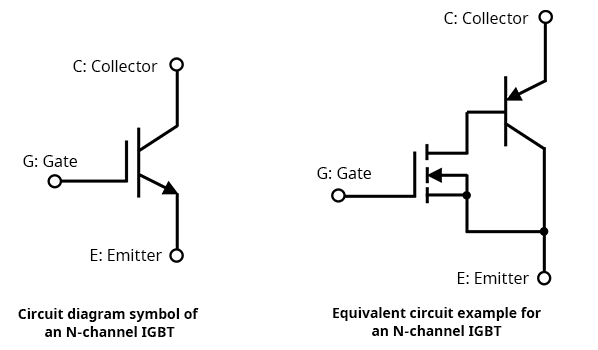 ・IGBT is an acronym for Insulated Gate Bipolar Transistor.

・They are power transistors that are hybrids of MOSFETs and bipolar transistors, thereby combining advantages of both.

・Their basic features include a high input impedance, fast switching, and low on-resistance even at high voltage ratings.