Hybrid MOS Combines the Advantages of Both MOSFET and IGBT

This time, we explain a type of MOSFET that ROHM has christened "Hybrid MOS", combining the advantages of both MOSFETs and IGBTs. They occupy the position in the red frame at the bottom of the following graphic. 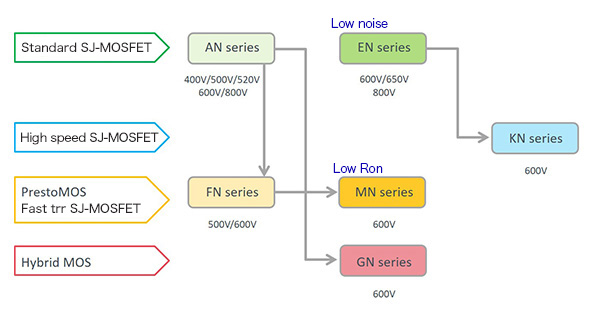 The table below compares the features of IGBT, SJ-MOSFET, and Hybrid MOS.

The following diagram compares these transistors in somewhat more detail, by evaluating five aspects of each on a five-level scale. We see immediately that the Hybrid MOS offers excellent all-around performance.

The high-temperature operation of a Hybrid MOS is greatly improved over that of SJ MOSFETs, and operation with larger currents is also possible. As noted above, this is closely related to the temperature characteristic of the on-resistance.

The graph on the right shows detailed temperature characteristics of the on-resistance Ron of a hybrid MOS and an SJ-MOSFET. At high temperatures, the VDS for a given ID, that is, the Ron value of the SJ-MOSFET rises sharply. Thus in addition to when the ambient temperature is high, when the current ID increases and more heat is generated, the temperature rises and Ron also rises, and consequently the chip temperature moves upward, leading inexorably to a thermal runaway process. On the other hand, in a hybrid MOS the Ron and change in Ron are extremely low even at high temperatures; in comparisons at Tj = 125°C and ID = 20 A, a reduction in the equivalent Ron of 62% was achieved. 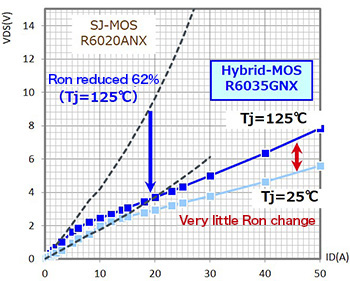 In comparisons with IGBTs, excellent switching characteristics comparable to those of SJ MOSFETs are achieved.

The Hybrid MOS is capable of high-speed switching, an area in which IGBTs fall short. If the switching frequency can be raised, smaller values and sizes for the inductors and capacitors making up the circuit can be used.

In addition, there is no tail current, which is one factor contributing to losses. In IGBTs, the tail current occurring at turn-off is a major issue for study.

Development Background Based on Market Demand

In recent years, amendments to energy conservation regulations have stipulated that home appliances display an APF (Annual Performance Factor), which indicates energy consumption efficiencies under conditions approximating actual states of use. Taking air conditioners as an example, in order to improve the APF, it is important to raise the efficiency during stead-state operation in which the room temperature is stable, that is, under low load. To this end, SJ-MOSFETs with the high efficiency at small currents are advantageous, but under high load, such as during rapid cooling and the like, often SJ-MOSFETs prove inadequate, and IGBTs are frequently used. But IGBTs suffer from poor efficiency at low load, and so from the standpoint of raising the APF, a solution had been sought that enables high efficiency over all ranges. The Hybrid MOS is an MOSFET that was developed based on just such situations.

The graph below evaluates a Hybrid MOS, an SJ MOSFET, and an IGBT in the PFC circuit of an air conditioner.

The efficiency curves reveal the features of the different transistor types explained above. The Hybrid MOS transistor maintains efficiency on a par with IGBTs under heavy load, while achieving efficiency far beyond that of an IGBT under light load.

This is an example of an air conditioner, but the features of the Hybrid MOS are highly useful in many other products as well. The relative positioning of the Hybrid MOS with respect to existing applications using IGBTs and applications that use SJ-MOSFETs are shown below. The ranges covered by the different transistor types with respect to power levels and switching frequencies are shown. 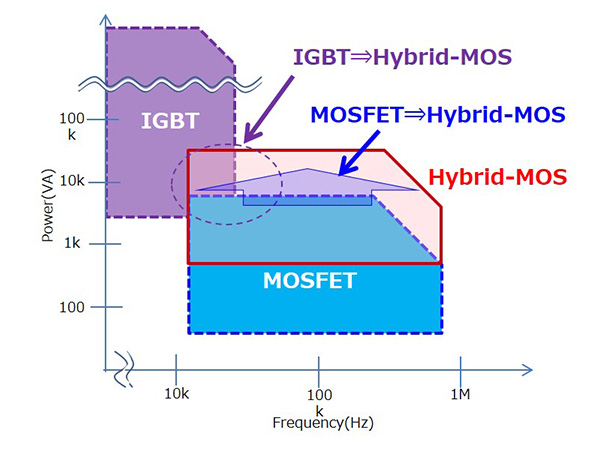 ・The Hybrid MOS is a new-structure MOSFET which combine the advantages of both SJ-MOSFET and IGBT.