The BD81A44EFV-M automotive LED driver and its evaluation board were used in comparison and evaluation of the heat dissipation of the PMDU and PMDE packages, the results of which are described below.

Below the LED driving circuit (DC/DC part) of the evaluation board for the BD81A44EFV-M is shown. This LED driver uses a buck-boost DC/DC converter to control the output current. As the diodes D1 and D2 in the circuit, the RBR2VWM40ATF, which is an SBD in a PMDE package, and the RBR2MM40ATF, which is an SBD in a PMDU package, were used for comparison. The internal elements of these SBDs were the same; the only difference was the packages.

Below, the PCB layout for the evaluation board is also shown. The evaluation board has a full four-layer configuration, with copper foil thicknesses of 70 μm on the surface and in the fourth layer (rear surface) and 35 μm in the second and third layers. The pattern of the first layer is as shown in the diagram; the second through fourth layers have 74.2 μm square patterns on a side. The mounting positions of the diodes D1 and D2 are indicated in pink. At these positions, the RBR2VWM40ATF (PMDE) and RBR2MM40ATF (PMDU) were respectively mounted, and comparative evaluations performed. 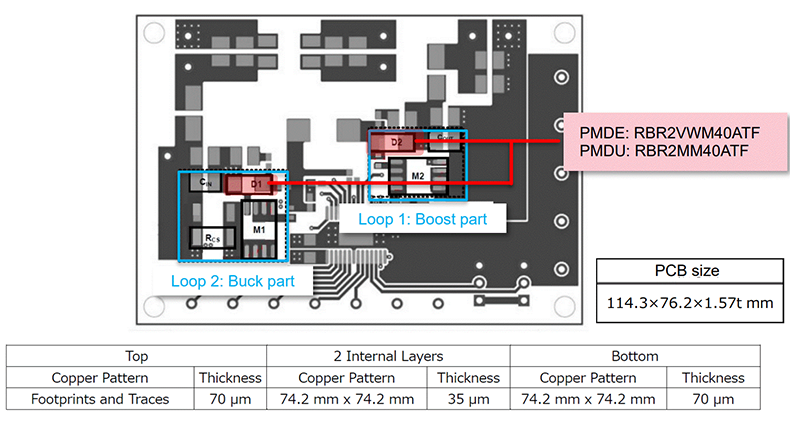 PCB layout of the BD81A44EFV-M evaluation board

Below are shown thermograph measurement results (package temperatures Tc) for PMDU and PMDE packages on an evaluation board during operation.

The difference between Tc values for the PMDE and PMDU packages is slight; the temperature differences were, on the buck side, ΔTc(D1) = 1.7°C, and on the boost side, ΔTc(D2) = 1.2°C. Despite its compactness, a PMDE package efficiently dissipates heat to the board, so that the package temperature Tc can be held to about the same value as a PMDU package.

Results of efficiency comparisons indicated that the efficiency peak ηpeak (PMDE) for the PMDE package was 88.6%, while the value ηpeak (PMDU) for the PMDU package was 88.7%, or nearly the same. The internal elements of the SBDs used were the same (temperature coefficients were the same), so that the element temperatures Tj could be inferred to be the same as well. In other words, in these evaluation conditions, we find that while the PMDE package is more compact than the previous PMDU package, they exhibit heat dissipation equivalent to that of the PMDU package, and suppress thermal runaway risks to about the same degree. 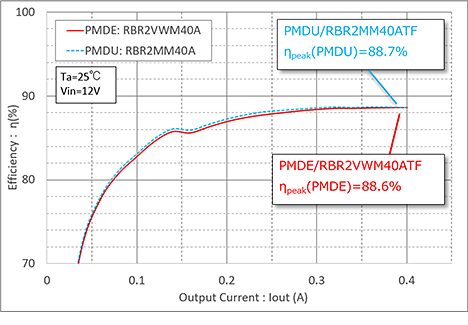 ・In these comparative evaluations, the PMDE package had a package temperature Tc and an efficiency comparable to those of the PMDU package, despite its compact size.

・It can be inferred that if efficiencies are similar, Tj values will also be similar, indicating that the PMDE package, while compact, exhibits heat dissipation performance similar to that of the PMDU package.