In a step-down converter with a fixed frequency and with peak current control, the inductor current flows continuously, and it is well known that if the duty cycle is 50% or higher, subharmonic oscillations occur. In nearly all recent ICs for use in power supplies, a slope compensation circuit is provided to address this issue.

This time, we stray somewhat from derivation of transfer functions for DC/DC converters to explain an analytic solution for subharmonic oscillation, an understanding of which is important. 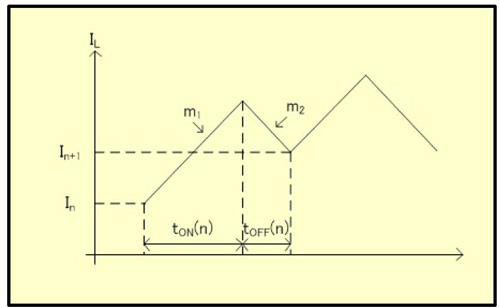 These can be used to express In+1 in terms of In as in equation 3-15 below.

Fig. 11 below shows a PWM input waveform corresponding to Fig. 10. If the current sense gain is RS, then immediately after turning on the PWM input is RSIn. 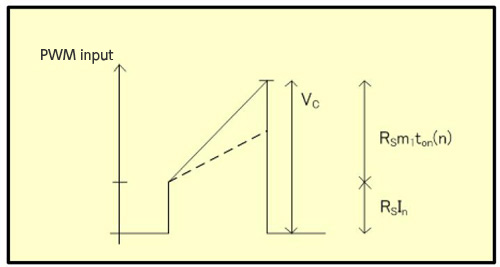 Further, the current that has increased during tON becomes m1tON(n), and so the PWM input peak voltage VC is as expressed by equation 3-18.

From equation 3-18, tON(n) is found, and upon substitution into equation 3-15 and calculating, equation 3-20 is obtained.